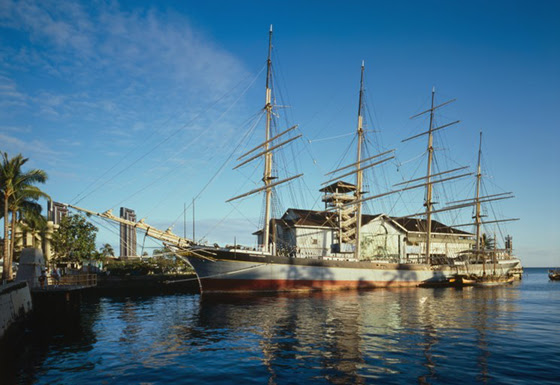 When you’re asked to work on a project restoring a 140-year-old bulk carrier to her former glory, it’s something you simply cannot refuse.

The Falls of Clyde, the only remaining sail-driven oil tanker in the world, is heading back to her birthplace in Scotland after sailing the seas for 140 years. Built in 1878 by Russell & Co at their Bay Shipyard in Port Glasgow she is a survivor and the last of her kind, a testimony to the workmanship of Scottish shipbuilding.

Currently based in Honolulu and at risk of neglect, David O’Neill, the creator and director of Falls of Clyde International, an organisation founded to save the historic Falls of Clyde from being ‘scuttled’ by the Honolulu harbours department says, “She will become a symbol of Scotland’s lead in the world of new eco-technologies, alternative propulsion and hydrogen/ electric power systems”.

David’s vision wasn’t, however, to keep her as a static nod to Scotland’s proud nautical past by turning her into a dry-docked museum, but rather create a unique piece of history capable of sailing for a further 140 years. With a passion for the environment and climate change, David set out to create a carbon-neutral vessel that will fly the flag for Scotland’s engineering and green tech abilities.

Falls of Clyde International have approached MIT—who, since 1974, have been designing, supplying and servicing transmissions and driveline systems across the UK and Ireland, and whose expert team of alternative power engineers have been working on a range of solutions to deliver emission-free sailing—to look at developing a sustainable diesel alternative power solution for this unusual project

The initial plans are to use a combination of industry-leading marine thrusters driven by either electric or hydrogen power, manufactured by Veth Propulsion who, with an ethos built around simplistic and intensely engineered solutions, over the last 5-6 decades, have developed a range of robust and sustainable emission-free power alternatives, suitable for a variety of vessels due to the flexibility of their models.

Tom Binns, Sales Manager, MIT, said, “With sustainability at the core of our business strategy, we are delighted to play a role in such a historical project. Backed by Veth Propulsion, we are confident we have the best solution to deliver years of emission-free sailing. We look forward to welcoming such a prominent part of Scottish maritime history back to our waters”.

The Falls of Clyde International are currently engaging with a property developer based in Glasgow to discuss a new home for the vessels rebuild. The proposal would also offer the possibility of creating a new maritime centre on the site.

Marine architects and designers also have the opportunity to be involved with the project. FOCI plan to launch a competition for the redesign of the entire ship, with details to be released shortly.

You can follow her journey in full here: https://www.foci.scot/