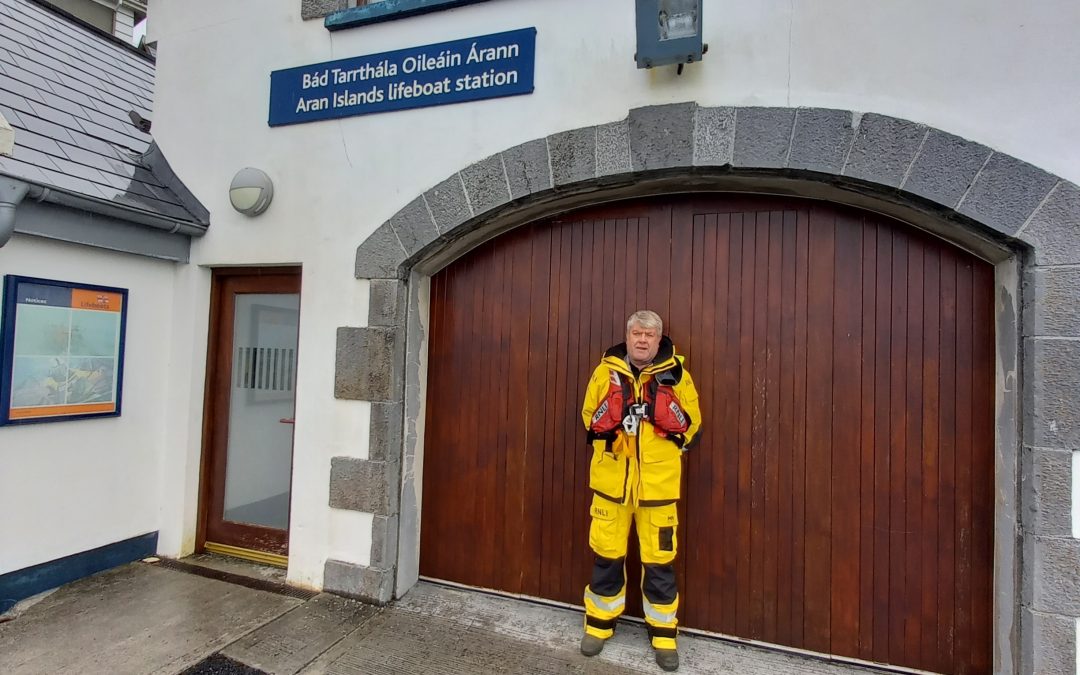 Johnny is one of Aran Islands RNLI’s longest serving crew members having first joined the volunteer crew in 1984, as soon as he turned 17. His early passion for the lifeboat came as a child growing up watching his father, John Snr, also an active lifeboat volunteer, respond to his pager and go to the aid of those in difficulty at sea.

Having completed his secondary education on Inis Mór, Johnny went on to do a block laying course and worked in the building trade for a time while continuing to serve as a volunteer crew member on the station’s all-weather lifeboat.

From the Barnett class through to the current all-weather Severn class lifeboat, Johnny has throughout his 35 years with the charity, seen many changes as the technology on the lifeboats advanced bringing huge benefits to the area Aran Islands RNLI covers and the people it serves.

Johnny who has been on over a 1,000 call outs and recently received a 30-year Long Service Award from the RNLI recognising his selflessness, courage and commitment, said it was hard to pick out a stand out rescue. However, his abiding memory will be ‘any call where we brought a person or people home to their families. That was always a good call’.

Paying tribute to Johnny this week, Rob King, RNLI Area Lifesaving Manager said: ‘Johnny has made a significant contribution to saving lives at sea off the Aran Islands for more than three decades and we are extremely grateful to him for his dedicated service throughout that time. His job as full-time mechanic ensured the operational effectiveness of the station through the operation, maintenance and repair of the lifeboat and its associated machinery and equipment. As he embarks on a new chapter, we want to thank him and wish him every good health and happiness.’

Michael Hernon, Aran Islands RNLI Lifeboat Operations Manager added: ‘Over the years Johnny would have experienced all types of call outs and braved all sorts of weather and challenges at sea to help those in need.  All at Aran Islands RNLI would like to wish Johnny the very best for the coming years and thank him for his years of service.’