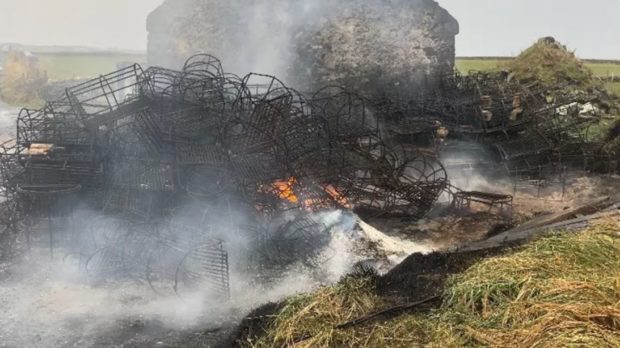 Two fishermen whose family have fished off the Easkey coast in west Sligo for generations have had their livelihoods destroyed overnight by a freak fire.

A Go Fund Me fundraising campaign has been established online to help get Gary and Eugene Kelly back out on the water in time for the start of the 2022 season in two months’ time.

The brothers have been fishing together for over 20 years from their boat The Gannet and specialise in lobsters and flat fish.

They are now facing possible ruin following the fire that broke out where they store all of their lobster pots and fishing equipment near Pullaheeny harbour on December 9 last.

Gary said that the value of the damaged property could run up to €100,000.

“It’s devastating and a very strange thing to happen,” he remarked, explaining that all of their equipment was stored outside.

“We’ve been storing stuff at that pier for generations and nothing has ever happened to it. My biggest fear would have been that someone would steal the stuff. I never thought that everything would go up in smoke,” he added, stressing that absolutely everything was destroyed in the blaze including pots, nets, ropes, buoys, store cages, bait and fish boxes .

The cause of the fire remains under investigation and a fundraiser has now been set up on the online Go Fund Me platform to try to get Gary and Eugene back on the water.

Gary explains that funding will not be the only obstacle in that respect: “The equipment is gone so expensive but getting it is also very difficult. There’s only a handful of people in Ireland making lobster pots now and the few I have rang are already booked out for this season.”

If you would like to support Gary and Eugene you can do so by clicking here: https://gofund.me/1970d771