An Introduction to Floating Offshore Wind 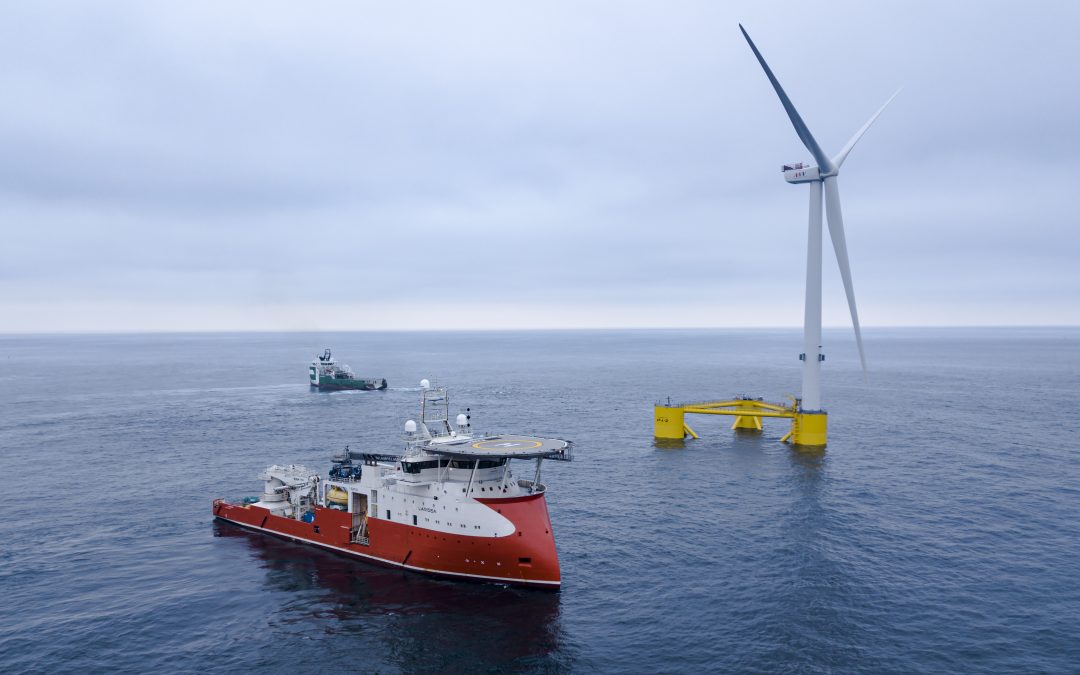 The battle to control climate change will be lost or won this decade. Extreme climate events are already having widespread impacts on people and the planet. We know that continued emissions of greenhouse gases will cause pervasive and irreversible impacts on our marine and terrestrial ecosystems. Renewable energy forms part of the solution to moving towards a zero-carbon economy by 2050.

Offshore wind provides a clean, renewable source of energy, that avails of our abundance of wind and vast marine resources. In Ireland, we have focused almost exclusively on onshore wind in recent years, however government has a vision to go offshore — with targets for 5GW of bottom-fixed offshore wind by 2030, and a stated ambition of more than 30GW of floating wind in our deep Atlantic waters.

The deployment of floating wind can breathe life back into rural Ireland, where coastal communities are struggling to provide quality jobs to retain younger generations. For example, the development and construction of the Emerald floating wind farm will require over 2 billion euro of investment from industry. It will rely on a backbone of maritime infrastructure in the form of ports and harbours, coupled with engineering, environmental and operational know-how. Once built, an offshore wind farm will operate for 25 years, ensuring the long-term need for jobs to support operations and maintenance.

If we get this right, the deployment of floating wind technology means that Ireland will be able to export energy to Europe and further afield, from 2030. Floating wind is potentially therefore to Ireland, what North Sea oil was to Norway.

The question is, how best to manage our shared and valuable marine resources, so that these benefits can be realized for current and future generations? In particular, how can floating wind technology and fisheries co-exist? The answer to this question starts with information sharing. This is the first of a series of six articles to be featured in The Skipper to present insights into the floating offshore wind sector. The series, sponsored by Simply Blue Energy, aims to provide fishers and other relevant stakeholders with insights into: the status of floating wind development, how the technology works, opportunities for benefit sharing between floating wind and fisheries, the floating wind supply chain, case studies (e.g. of floating wind in the UK, Portugal and France), and training and capacity-building opportunities.

What is Floating Offshore Wind (FLOW)?

FLOW is a fast-maturing renewable technology, that accesses deeper water depths (i.e. circa 60-1000m). Floating offshore technology is at an early commercial phase, requiring development at volume and scale, to bring the cost down. It is expected that FLOW technology will be cost competitive against bottom-fixed (piled) offshore wind technology by 2030.

Demonstration projects deployed in Europe include Hywind Scotland 30MW; Kincardine 50MW; Groix Belle Ile 30 MW; and WindFloat Atlantic 25MW. The Erebus 96MW pre-commercial FLOW demonstrator is in development off the coast of Wales, via a joint venture between Total and Simply Blue Energy. The UK government recently announced a target for 1GW of FLOW by 2030. FLOW projects are also being progressed in other jurisdictions such as the US, Vietnam, Japan and South Korea.

What is happening in Ireland?

The Irish Government has set a target for 5GW of offshore wind by 2030, as part of the climate action plan. The so-called ‘relevant projects’ constitute bottom-fixed offshore wind farms in the Irish Sea. However, given project attrition likely to occur during consenting, and constraints for space in the Irish Sea, the sector is advocating for Celtic Sea FLOW projects to be progressed, in order to meet the 2030 target.

The enactment of the Marine Planning and Development Management Bill, expected early next year, is central to these projects being progressed. Route to market is another key issue for FLOW projects, requiring planning and investment in grid, interconnectors and green hydrogen production. The decade ahead will see the foundation stones for the FLOW sector in Ireland being laid. This is already creating opportunities in the supply chain, for example with 80 new jobs recently announced by Green Rebel Marine for a survey and training hub in Crosshaven.

The keystone is the relationship between FLOW developers and the fishing industry, acknowledging that commercial fishers, dependent on the sea for their livelihoods, are the principal stakeholders to be considered. Benefit-sharing opportunities will be explored in a subsequent article, presenting work done as part of the UCC EirWind project, which captured the views from 33 in-depth interviews with members of the fishing industry.