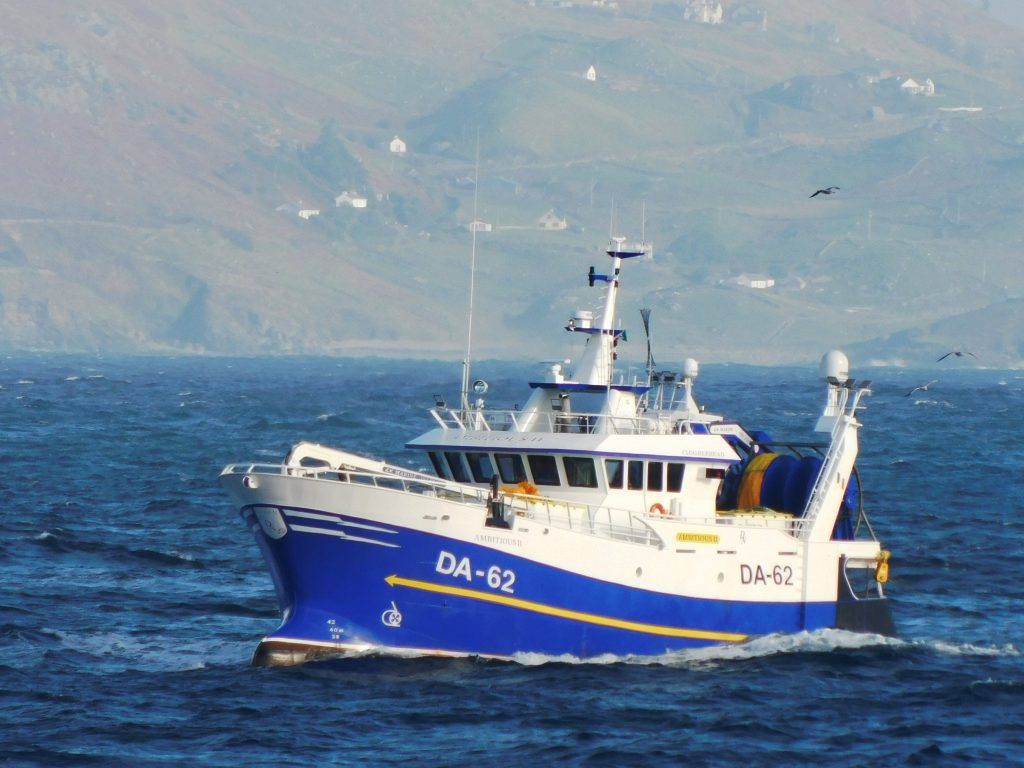 The multi-rig prawn freezer trawler Ambitious II was built at Parkol Marine Engineering for brothers David and Niall Kirwan of Clogherhead. She was lifted into the  river Tees on July 8th and moved to Parkols Whitby yard for final fit out, leaving there on September 8th to head to Killybegs to enable, EK marine to complete the final fit out and commissioning of the winches, net drums and hydraulic systems,

Ambitious II was designed by Ove Kristensen at Vestværftet ApS of Hvide Sande in Denmark. Ambitious II is the brothers second new build in 6 years, built to replace another French built vessel, Virtuous which has been sold to make way for the new vessel,

Vestværftet ApS designed the new vessel to include  improvements over the previous new built vessel Audacious  suggested by the owners. These included 2 more frames in the vessel to increase the length by one metre, taking it from 25.6m up to 26.7m. The beam has also been increased by 300mm taking it up to 7.8metres.  The hull has a moulded depth of 4.51metre, a draft of 5.0 metres and a Gross tonnage of 248 tonnes.

The steel hulled vessel is of round bilge construction with a bulbous bow and transom stern.  The steel extends up to the shelterdeck level with the wheelhouse being of aluminium. The shelterdeck extends almost right aft to the transom, leaving an open aft deck to shoot and haul the gear from. The wheelhouse is situated approximately mid-way between the stem and stern

The vessel was built to Bureau Veritas/MSO specification and features an extensive deck machinery, refrigeration and engine room package supplied by a number of well-known Irish companies, including EK Marine, Pat Maguire, A J Conaghan and Padmos, with whom David and Niall Kirwan had previously well-established working relationships. 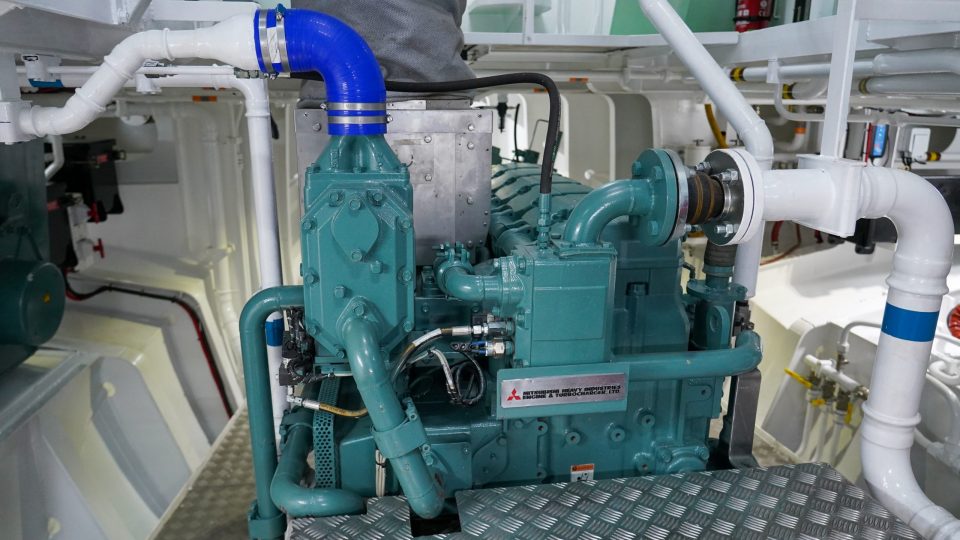 The Mitsubishi S6R2-T2MPTAW3M main propulsion engine is coupled to a Reintjes WGF 773, 12.490:1 reduction gearbox to turn an impressive 3000mm-diameter five bladed fixed pitch propeller in a high efficiency nozzle. This combination results in a maximum propeller speed of 108rpm, and typically around 80rpm when towing with the main engine running at 1000rpm.

A Stamford 140 kVA shaft generator is hydraulically driven by the auto trawl pump which is mounted on the front end of the main engine. This optimises the vessel’s electrical needs when steaming and reduces fuel consumption by eliminating the need to run any of the auxiliary engines

The Technodrive gearbox is fitted with an air flex coupling between engine and gearbox, which allows the crew to operate the clutch from the wheelhouse trawl console.

A back-up hydraulic gear retrieval system is provided by a 45kW 50Hz electric motor, driving a Parker PV 063 load-sensing pump and is supplemented by the auto trawl pump. This system is used while landing the catch and working on the gear, so there is no need to run the main hydraulic system.

Pat Maguire Marine Electronics Ltd supplied, installed and commissioned the extensive array of electronic equipment, information from which is displayed on flat screens flush-mounted in the main forward console. 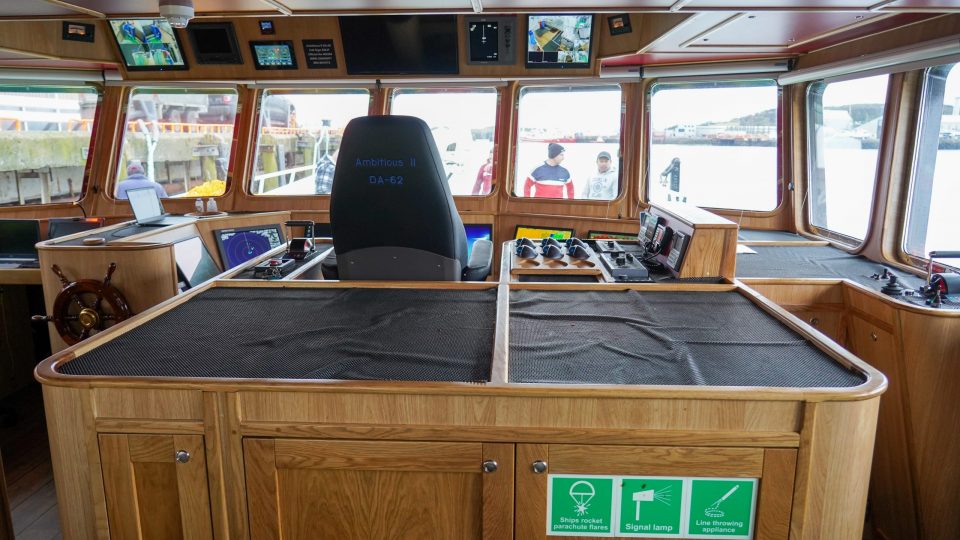 Both the Koden MDC 7912p and 2041A radars are interfaced to a Koden KAT 330 Class A AIS transceiver and, with ARPA, provide tracking both within the radars themselves as well as the plotting systems.

Steering and navigation is supported with a Simrad AP70 digital autopilot, Koden KGP satellite compass, a backup Simrad HS60 gps and a ships watch alarm. This alarm is also linked into the vessels main alarm system, which will alert the crew if not reset.

Gear monitoring is a Marport system with pitch and roll fitted.

All the working areas on the vessel are covered with a 10 camera colour CCTV system with two four-way split screens in the wheelhouse.

Continuing their increased relationship with both the Kirwan family and the Parkol Yard, Killybegs based EK Marine supplied the full hydraulic machinery package on Ambitious II  consisting of

The trawl winches are controlled by a complete  Scantrol trawl system with 2 control stations with wire counting  ,auto haul / shoot and a remote monitoring of system from the home office. 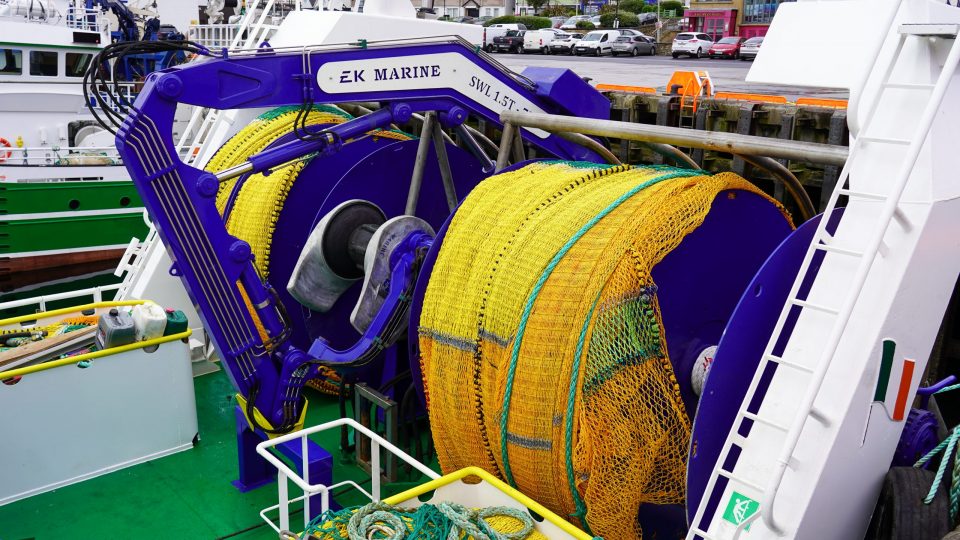 The trawl gear package for Ambitious II was supplied by Swan Net-Gundry in Killybegs, for whom David acts as there east coast agent 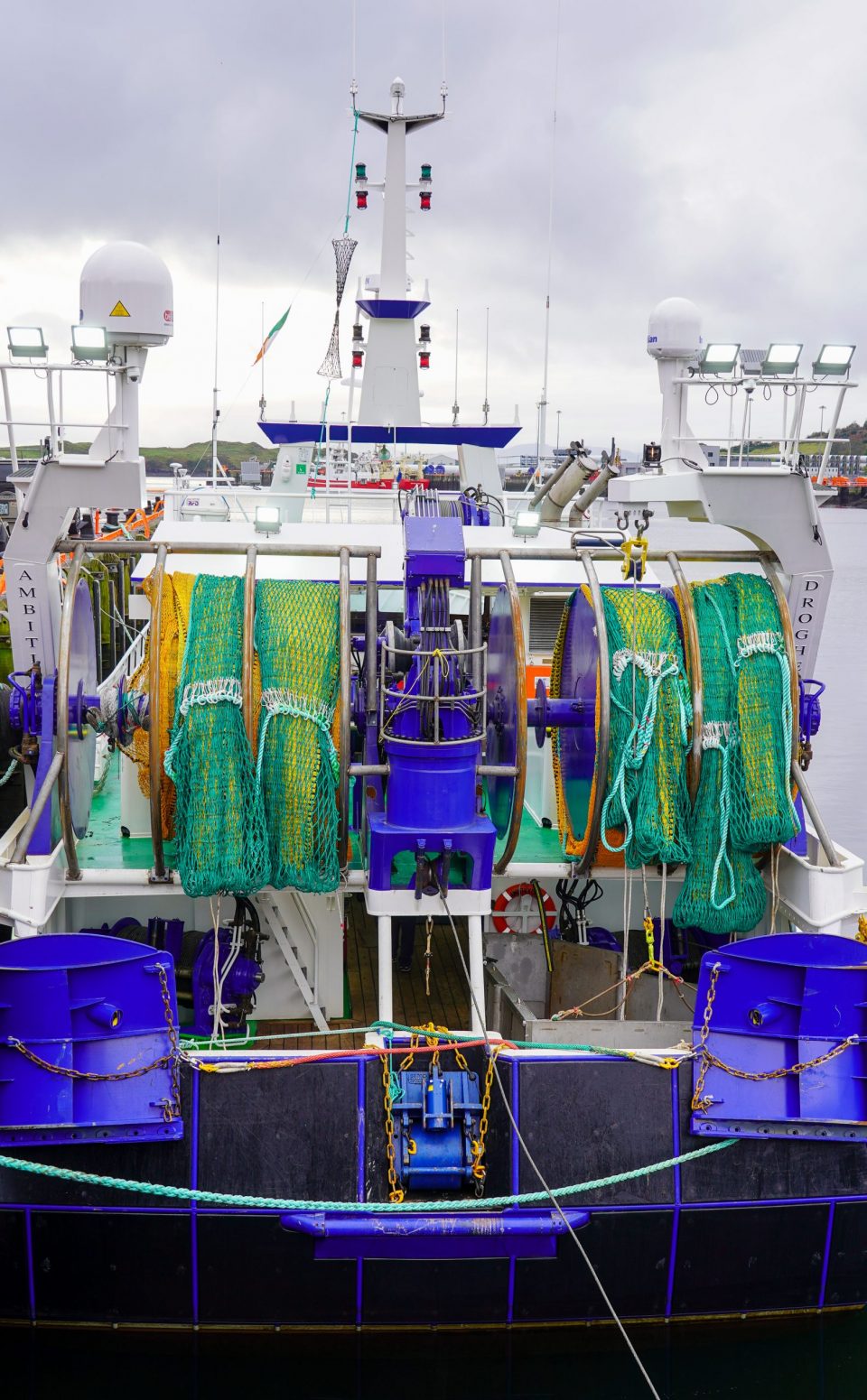 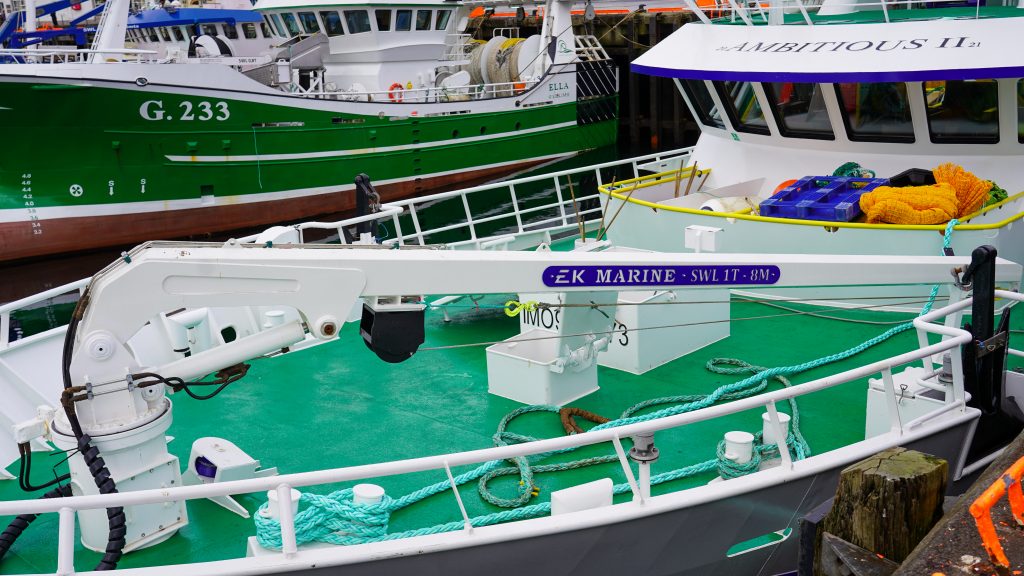 The vessel has been insured with D&D Insurance and will use Clogherhead as its home port.

The Ambitious II will target prawns and whitefish to be sold directly by David Kirwan to well-established customers in Europe. This personal level of service, which also includes an in-house transport system, ensures that the Kirwan’s are in constant contact with their clients at all times and are therefore able to offer a bespoke service in line with their customers exact requirements.

David and Niall would like to thank everyone who made this project possible.

Finally anyone else who we have not named but who has helped us over the years, Thank You.” 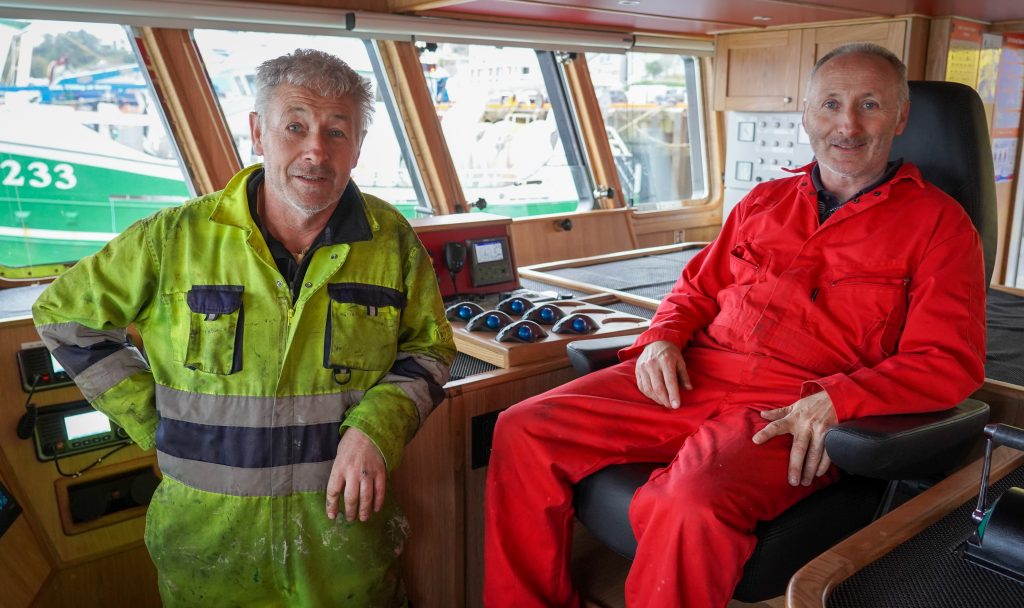 “With the small quotas Irish boats have to work to, especially after the disaster of the unfair loss of even more of our quotas due to Ireland having to take a larger burden share of the reallocation of fish quota after Brexit, the huge loss of Rockall and boats being ring-fenced out of certain species, we felt we needed to be in a position to catch our quota in a more efficient and cost-effective manner, hence less fuel, and fewer CO2 emissions.” 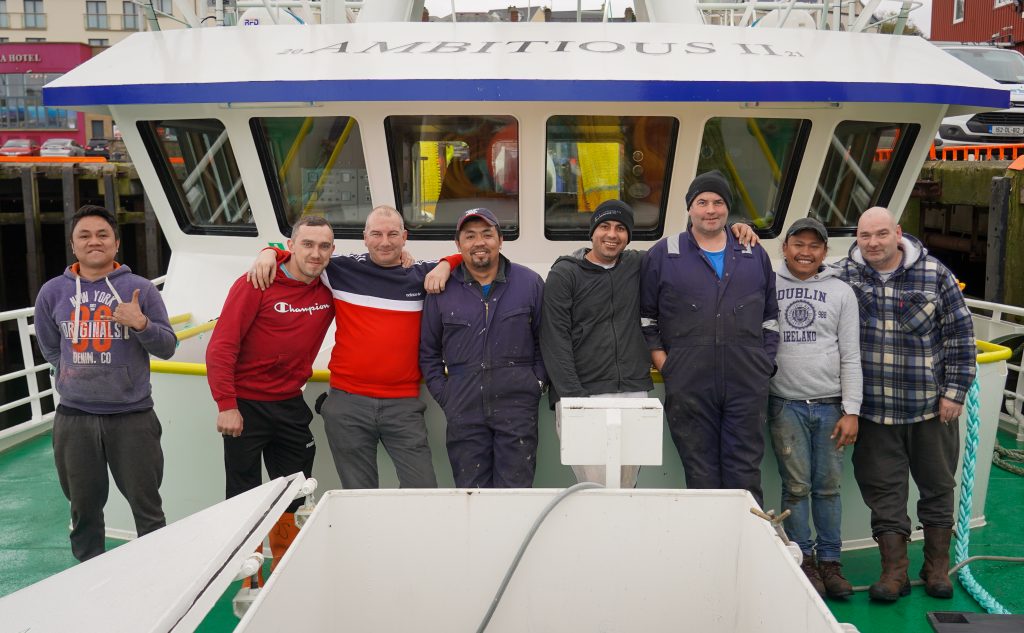 “This build was a double-first for Parkol: our first export to the Republic of Ireland and the first vessel built with Danish Naval Architects Vestværftet Aps.

Although she was built during a very challenging time for the industry and Parkol with the impacts of global pandemic and Brexit, Ambitious II is a credit to our dedicated workforce.”

The Skipper would like to wish David & Niall, crew and family every success and good fishing with the Ambitious II 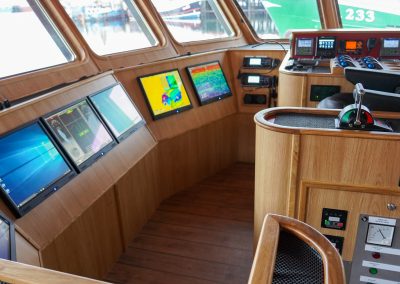 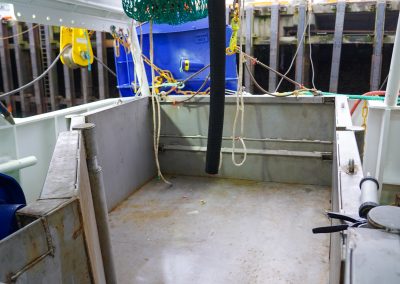 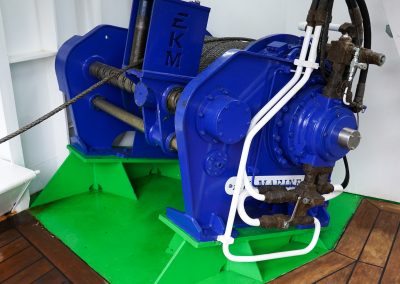 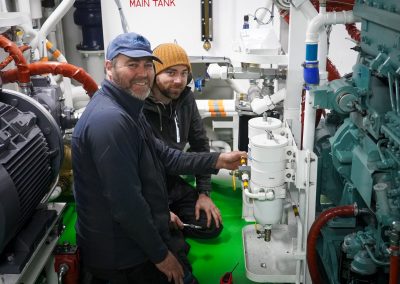 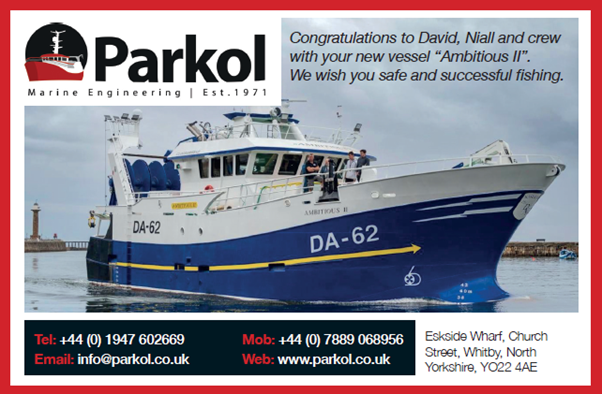 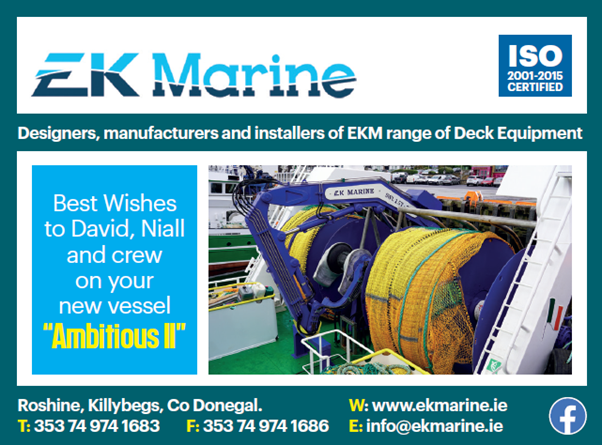 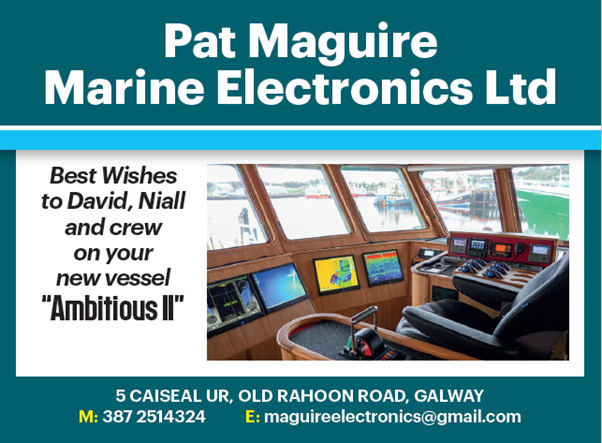 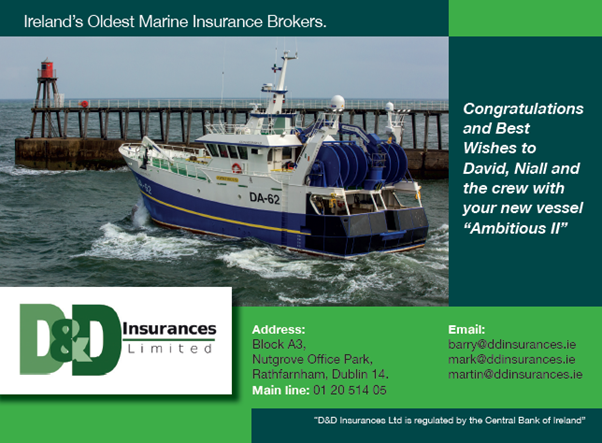 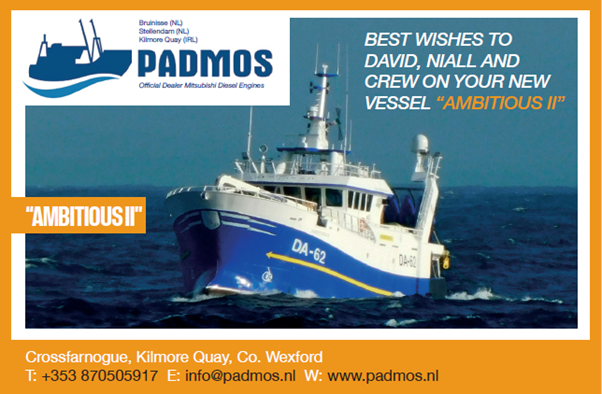 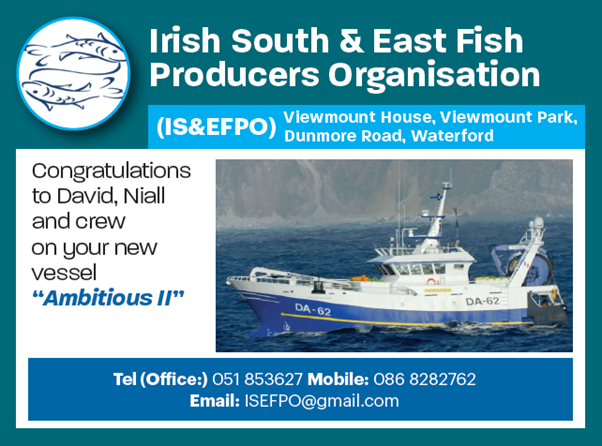 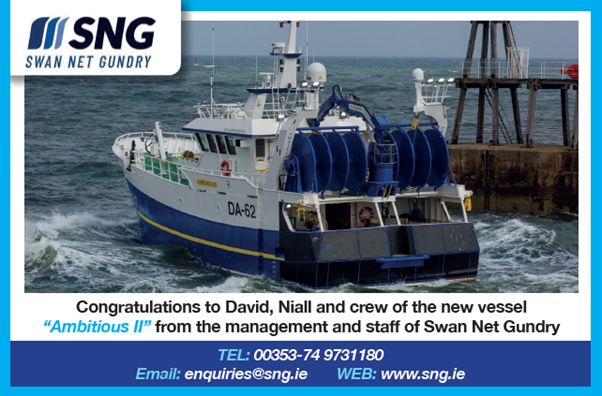 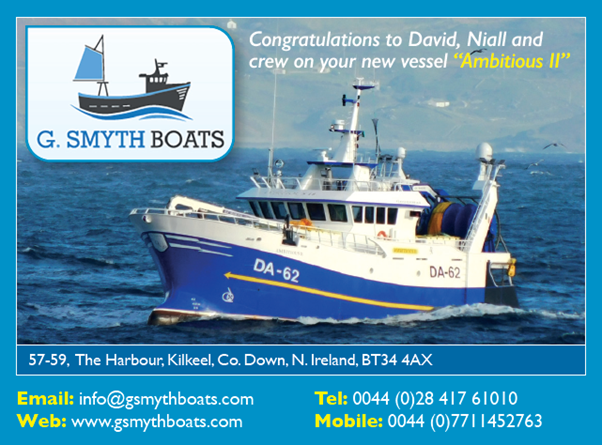