New netter Amanda of Ladram narrowly managed to make a start with a couple of days’ fishing after making its delivery trip from Whitby to Newlyn, before an unusually big spring tide ruled out netting and kept the new boat alongside for a few days.

The first new netter of its size for the UK fleet for at least fifteen years, Amanda of Ladram is built for English fishing company Waterdance at Parkol in Whitby to a design by Ian Paton at SC McAllister. The build process was hampered by Covid restriction, as construction began just as the UK went into its first lockdown last year – but the yard made up time and completed Amanda of Ladram on time.

Sea trials were carried out off Whitby and skipper John Walsh and his crew steamed the new boat home to Newlyn, with a call on the way at Brixham to pick up a couple more crew members, before putting the gear on board and heading out for a first trip. The first landing was made in Newlyn, with the fish sold at the Brixham auction – and the first box of Amanda of Ladram’s fish was sold to the Greendale Farm Shop, a partner company within the group that owns Waterdance. The first box fetched £550 for the Fishermen’s Mission, which was matched by Brixham Trawler Agents and added to with a contribution from Parkol.

As well as having grown steadily to become one of the largest English fishing operators with a series of acquisitions in recent years, Waterdance has already made some significant investments in new capacity, having built potter Nichola of Ladram and beamer Georgina of Ladram at Luyt in the Netherlands.

Amanda of Ladram is the first of its new vessels to be built in the UK, and is an addition to the fleet, which has seem some changes taking place among the netters fishing from Newlyn for hake, monk and turbot. John Walsh had skippered Padstow netter Charisma for more than twenty years before it was acquired by Waterdance, and a few years later the company bought Scottish trawler Asteria, which was refitted as a netter and renamed Amanda of Ladram. John Walsh and his crew moved across to the new vessel, which Stacy Gambrill took over Charisma.

Now John Walsh and his crew have moved across to the newbuild, the former Amanda of Ladram has been renamed Rachel of Ladram, now worked by Stacy Gambrill and the crew who had worked Charisma. In turn, Charisma of Ladram is now skippered by Alan Dwan as he joins the Waterdance fleet. 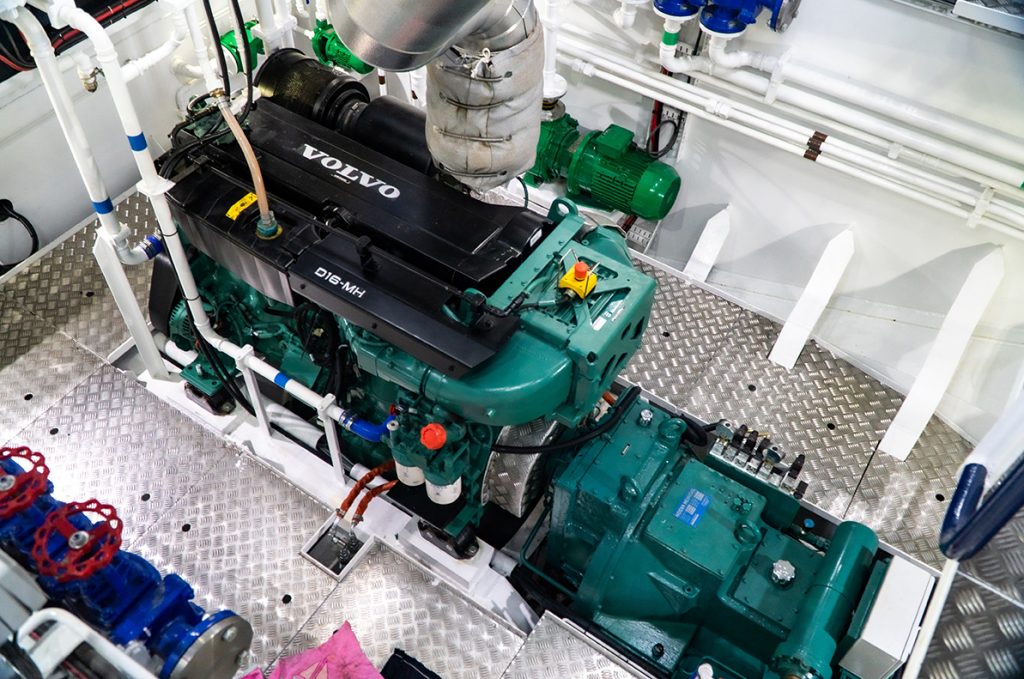 The main and auxiliary engines are Volvo Pentas

‘We’re very pleased with the build, the project management and the speed of delivery,’ said Waterdance Head of Fisheries Martyn Youell, commenting that Amanda of Ladram joining the fleet is part of a broader theme of strengthening the company’s activities in Newlyn.

He commented that in going to Parkol and designer Ian Paton at SC MacAllister, they were looking for an efficient, stable and safe new netter.

‘We’re very pleased to be building in the UK. Amanda of Ladram is relatively small in length terms, but this is a larger, more stable vessel. It’s also efficient, with much lower emissions,’ he said.

‘We are investing at a challenging time, but we’re taking a long-term view and are confident that prices will return to their previous levels. We’re not being put off making future investments.’

The netting fleet’s primary target species of hake has also become increasingly important to Waterdance as the market for this fish continues to expand.

‘Hake has become very important to us, and the sustainability credentials for this are crucial for marketing. We see a growing demand for hake and a broad and growing range of buyers at the Brixham and Plymouth auctions, ranging from small-scale fish sellers to larger buyers who are looking to export,’ he said.

‘Hake is one of the species that has been hit hard by Covid and prices have been erratic through lockdown, but have now been relatively good for the last couple of weeks. Hake is a very important part of the business, along with sole, monkfish and plaice.’

Amanda of Ladram has an overall length of 20.40 metres and a moulded breadth of 7.70 metres. The steel hull is topped by an aluminium aft wheelhouse. The non-weathertight full-length shelterdeck and the mast are also fabricated in aluminium.

A Thistlelift MFB8 crane is mounted on the shelterdeck for landing Amanda of Ladram’s catches.

The layout places the 500-box capacity fishroom with its Geneglace icemaker forward, with the engine room amidships and accommodation for up to ten crew and passengers aft, along with the compartment for the Wills Ridley steering gear.

At main deck level the hauling position is on the starboard side, with a Spencer Carter hauler arranged to swing into its working position as the hydraulic hatch opens. The catch handling hoppers and washer are located on the forward deck, with fishing gear taken aft through a channel leading under the wheelhouse on the port side. 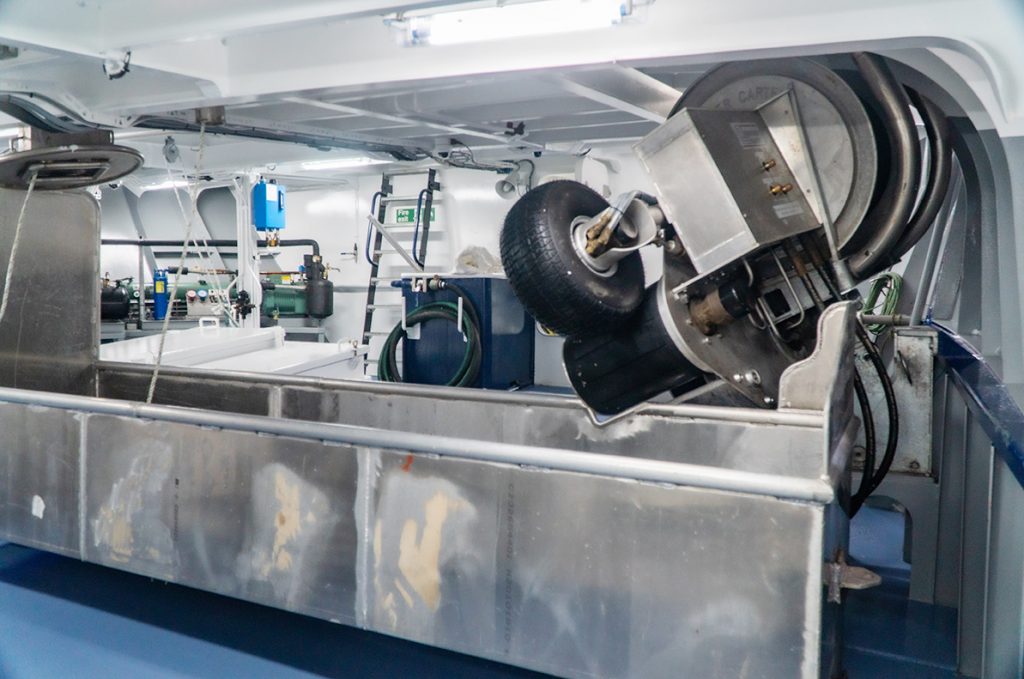 The superstructure amidships contains the galley, mess area, washroom and oilskin store. Fifteen net pounds are arranged under the aft shelterdeck, with capacity to hold all of Amanda of Ladram’s trammel and gill net gear, with no need to put gear ashore when switching between trammels and gill nets. A John Leach net flaking system capable of traversing in any direction runs on rails above the pounds to place the Net-Op net flaker where required.

Amanda of Ladram’s main engine is a Volvo Penta D16MH, developing 484kW to power the 2300mm diameter, controllable pitch, four-bladed propeller via a Nogva Heimdal CPP-HG389S reduction gearbox. The bow thruster is a Kort KT90. The main engine is used solely for propulsion and the twin Volvo Penta D5A-BTA gensets, each developing 100KvA, are run alternately to provide power for Amanda of Ladram’s energy requirements.

The wheelhouse systems have been supplied by Echomaster Marine, with AG Neovo 22-inch and 19-inch displays for the electronics and the E-Logbook PC. The fishfinder is a Hondex HDX-121 Black box chartplotter/echo-sounder with dual 50 and 200kHz frequencies and seabed mapping.

The plotters are an Olex 3D seabed chartplotter with AIS and HT modules, and a Maxsea Timezero, supplied to Waterdance by Globe Marine, with PBG and AIS modules.

The communications package includes an Icom IC-M423G VHF DSC radio, a Sailor 6210 VHF set and a JRC JSS-2150  MF/HF DSC set. The GM1600E GMDSS liferaft radio is from Icom and there is an ICS NAV6+ paperless Navtex receiver.

The V60Ka band VSAT antenna system for internet at sea with wifi is from Intellian.

Amanda of Ladram has a 16-channel CCTV system with 4MP cameras mounted in key working areas, plus a hull-mounted camera providing a view of the propellor and rudder.

Echomaster Marine supplied the VEP8 GPS EPIRB and the Phontek 10 station Intercom system for internal communication on board. The I6PE 60cm Satellite TV antenna with messdeck freesat TV and bluetooth soundbar is an Intellian system. 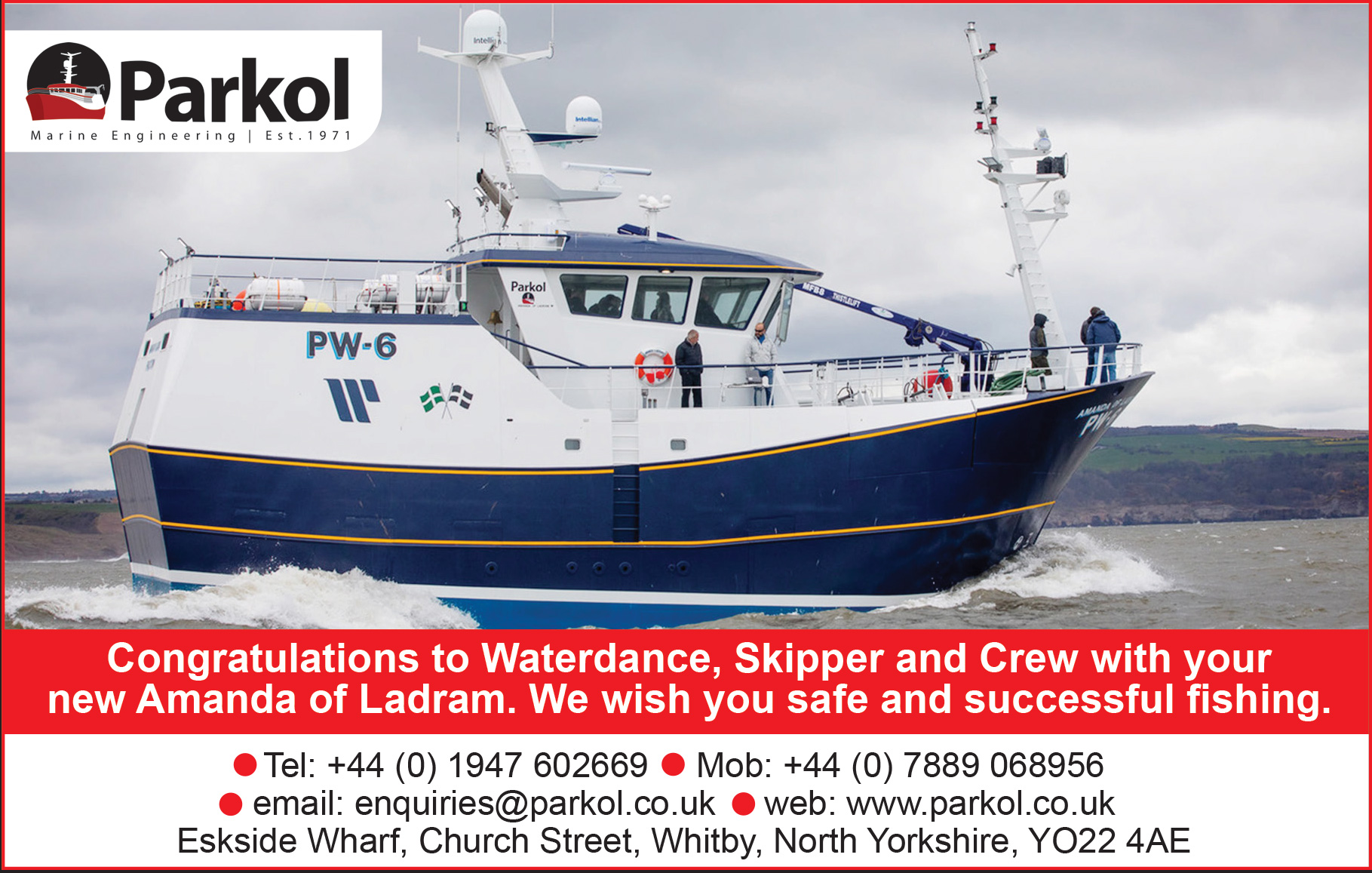 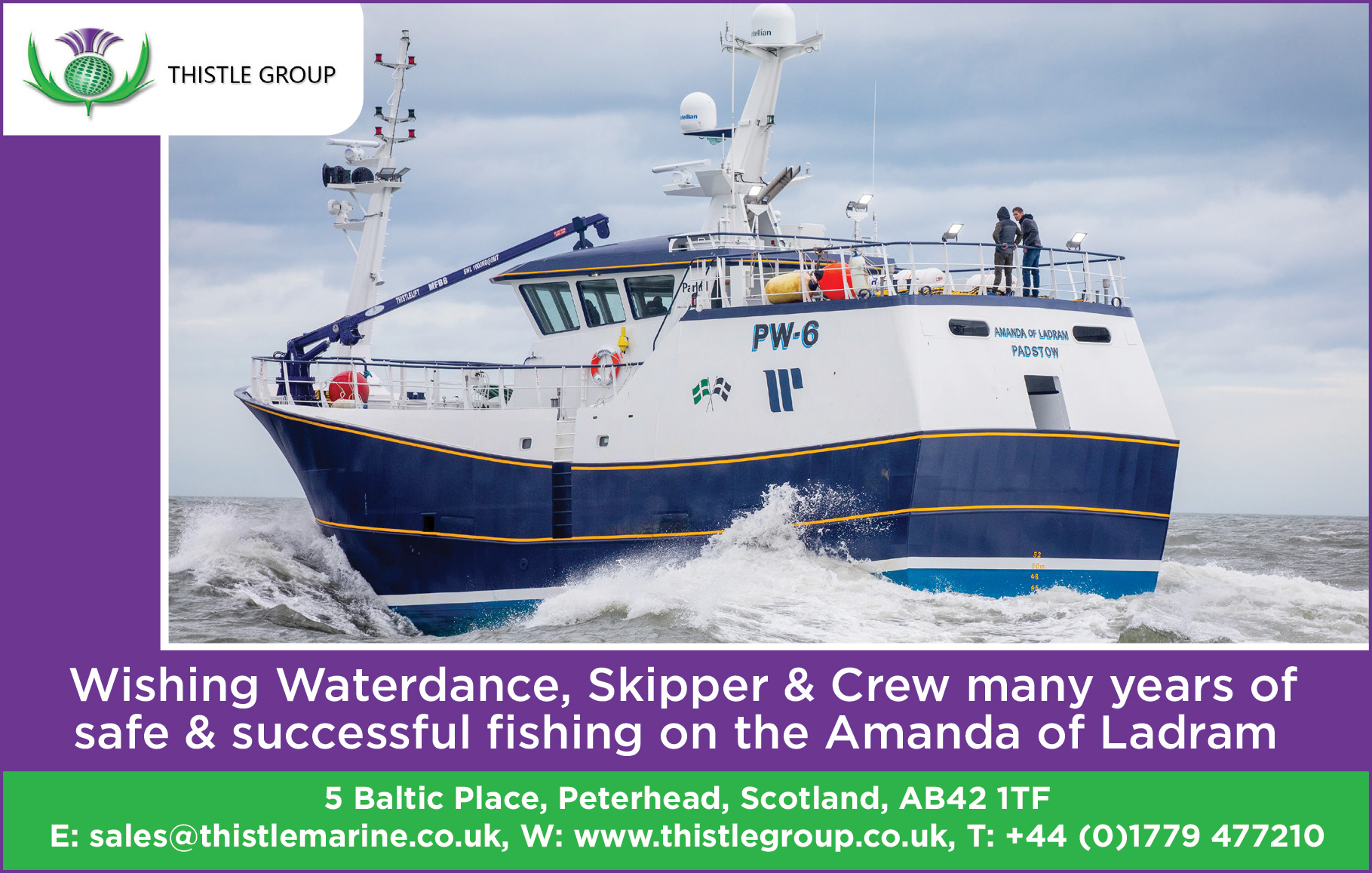 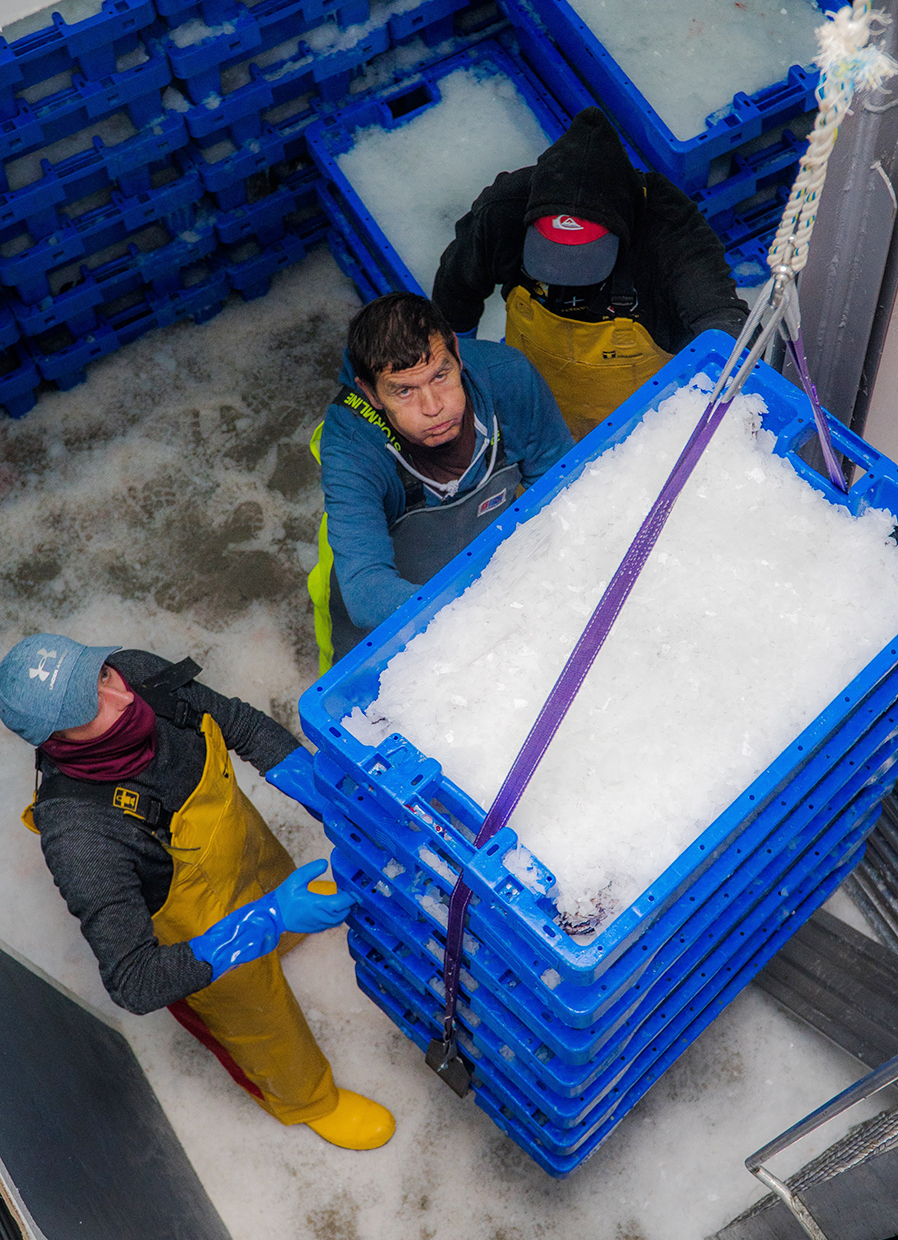 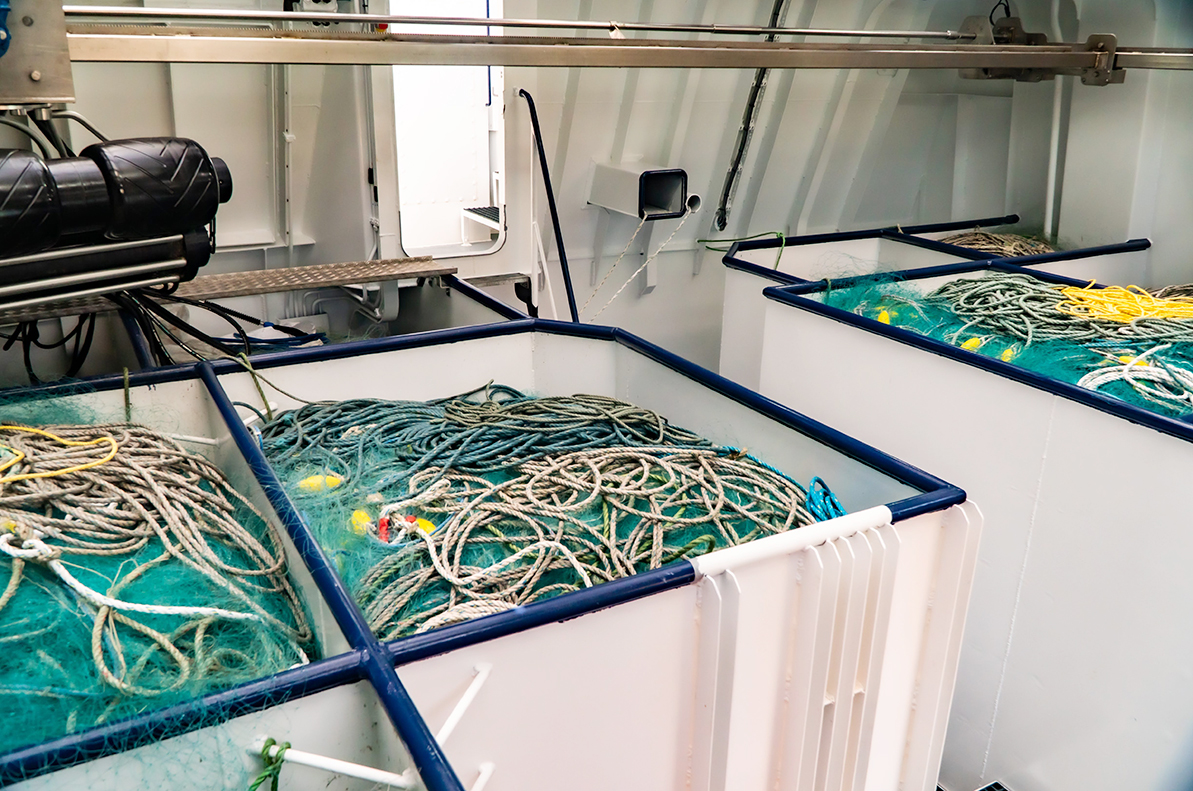 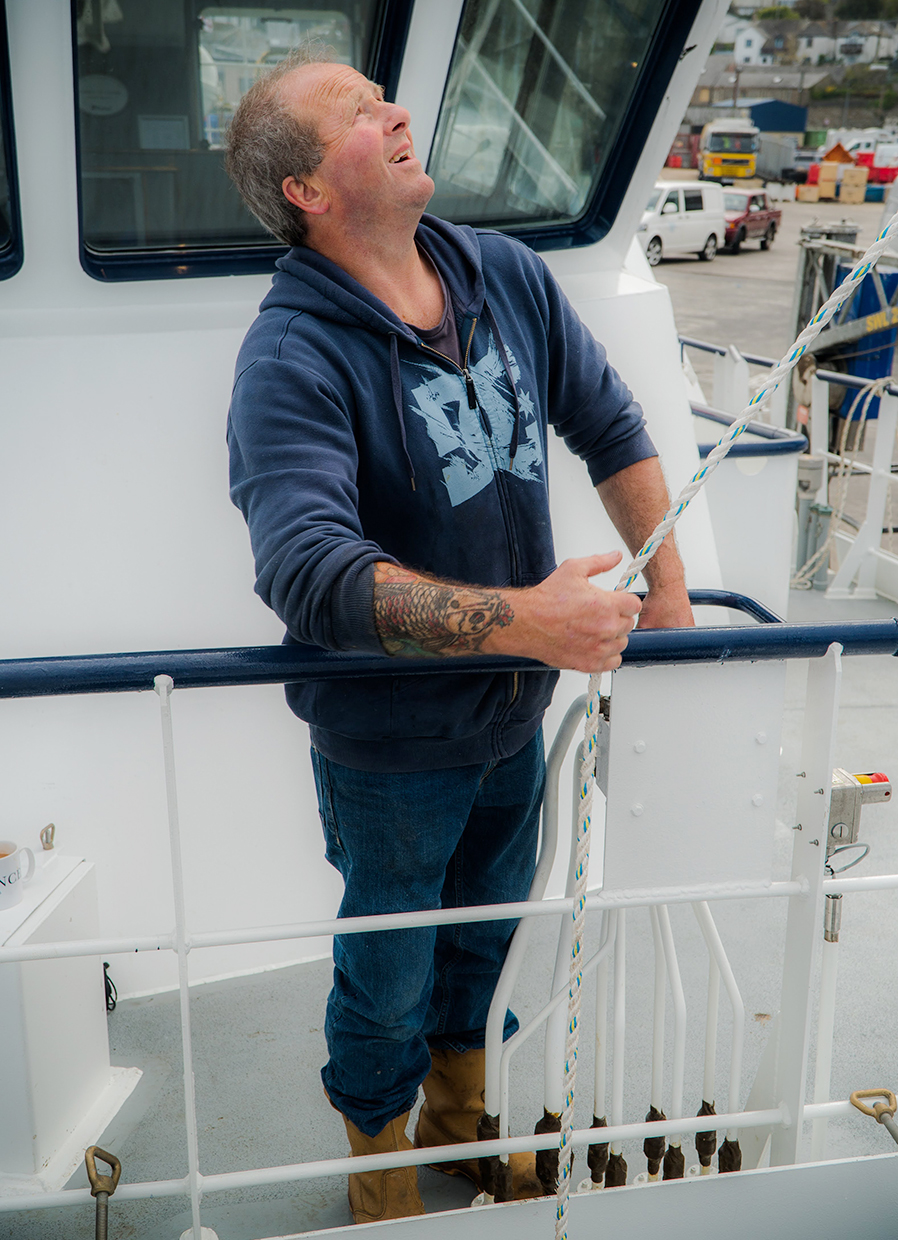