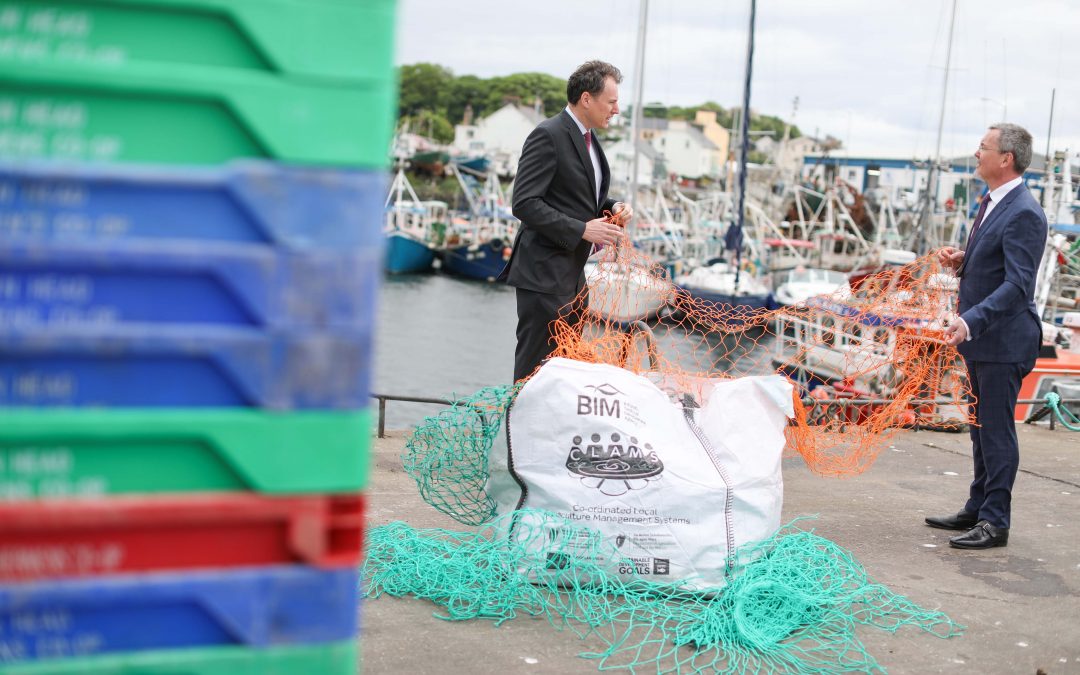 Minister for Agriculture, Food and the Marine, Charlie McConalogue T.D today paid tribute to the men and women working in Ireland’s seafood sector for their continued efforts to reduce Ireland’s marine waste as part of the Clean Oceans Initiative. To date, the collaborative efforts of the sector have resulted in more than 600 tonnes of mainly plastic waste being collected at sea and during shore and pier clean-ups. A new focus for the Initiative is the drive to help Ireland’s fisheries harbours with their waste management systems in collaboration with  local gear manufacturers to manage fishing gear throughout its life cycle.

Speaking at the pier in Greencastle, Co Donegal, Minister McConalogue commended Irish fishing, aquaculture and coastal communities for their achievements in helping to reduce what he described as “the plastic pollution pervading the marine environment.”

The Minister also highlighted the collective and ongoing work of the sector to better manage gear to prevent it from entering oceans in the first place and their efforts to remove waste from the Marine environment.

He stated, “The Irish seafood sector are a leading example of what can be achieved through collaboration. This collective approach is the key ingredient needed to tackle the plastic pollution pervading the marine environment. I am ever- impressed by the level of ingenuity being taken by the sector and this new focus to address the problem of marine waste is helping to protect Ireland’s marine environment for future generations.”

The Clean Oceans Initiative is being led by Bord Iascaigh Mhara (BIM), Ireland’s Seafood Development Agency, and supported by the European Maritime and Fisheries Fund (EMFF).

Jim O’Toole, CEO BIM spoke of the learnings being gained from the sector’s involvement in the pilot project to better understand the benefits of a circular economy and said, “BIM is proud to support the work of Ireland’s fishers, aquaculture producers and other members of the seafood sector in their continued Clean Oceans Initiative activities.  The sector has assumed a leadership role in the protection of the marine environment through marine litter retrieval. BIM will continue to work with industry to ensure they are prepared for new waste management requirements under impending EU legislation.”

About the Clean Oceans Initiative

In January 2019, The Department of Agriculture, Food the Marine launched the Clean Oceans Initiative. The first collaborative effort at sea and on land to reduce marine waste to protect Ireland’s marine environment. By year-end 2019, 244 Irish registered fishing trawlers were registered to the Fishing for Litter programme as part of the Clean Oceans Initiative, committing to collected marine waste when working at sea.

BIM is leading the Initiative and supporting the Irish seafood sector and local coastal communities to work together to ensure waste impacts are minimised and mitigation efforts are developed and recognised.

Involvement in the Clean Oceans Initiative demonstrate the Irish seafood industry’s commitment to sustainability and contributes towards Ireland’s responsibilities under the UN Sustainable Development Goals and the EU plastics strategy.

Reference: Expand the current baseline data collection programme from Fishing for Litter to include key inputs and output of the seafood sector in order to define the waste streams coming directly from the Irish industry.  This informs the direct mitigation initiatives.

Retrieve: Important and substantial actions are already underway in retrieval of marine litter across the Irish marine and seafood sectors. These include Fishing for Litter, shore and pier cleans and the Co-ordinated Local Aquaculture Management Systems (CLAMS). These programmes focus on retrieval of discarded material in the marine environment.

Reduce: Preventing waste from the sector becoming marine litter in the first place will be potentially the most environmentally impactful for the Clean Oceans Initiative. Targeting reduction in single use plastics and identifying alternatives is a clear priority. On-board initiatives along with the aquaculture ECOPACT and Origin Green will help ensure that all potential sources of marine litter are accounted for.

Record: A verifiable system to record and characterise the litter retrieved will be key to the success of this initiative.

Reach: BIM endeavours to work with our stakeholders and support their efforts under the Clean Oceans Initiative.

Reward: Championing and supporting individual and community efforts in the reduction of marine litter and plastics. Demonstrating performance and recognising the effort and co-operation that it takes to be successful and make a difference in protecting our marine environment is integral to the Clean Oceans Initiative.