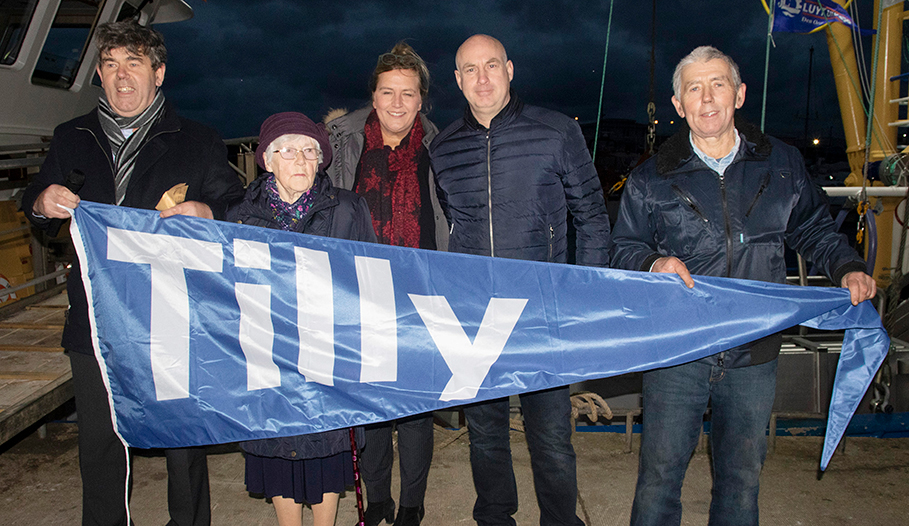 Crowds gathered in Kilmore Quay last month, to welcome the O’Flaherty’s new beamer home to Kilmore Quay. There was great anticipation on the pier as people eagerly awaited the arrival of the new beamer—Ireland’s first newly built beamer, and the first new boat for Kilmore Quay in thirty two years—as Tilly appeared on the horizon. With her beams up, eventually and to great excitement, Tilly proudly steamed into the harbour with the tide for her official naming ceremony.

Named after the O’Flaherty’s mother, widely known as Tilly (though her real name is Mary or as Denis pointed out in his speech, ‘just’ Mam to the O’Flaherty Brothers growing up), the Tilly WD 3 was warmly greeted by cheers from the community of Kilmore Quay and well-wishers from around the coast who had gathered on the pier.

Champagne and speeches ensued. Denis O’ Flaherty thanked all those involved over the course of the build process, with special mention going to skipper Johnny Bennett for his work over the last few weeks in Holland making the final preparations for the new boat’s journey homes. Jacqueline Luyt and Patrick Koopman from the yard also spoke, thanking the O’Flahertys, skipper and crew, and wishing them all the best with Tilly WD 3.

Tilly is the first new Irish build completed by the family owned firm, who acted as the main contractor on the new beamer, responsible for the entire build from design to completion. There were flowers for Tilly O’Flaherty, before Jacqueline and Patrick presented the O’Flahertys with the Tilly flag, signifying the vessel’s change in ownership from the yard to her new owners.

The vessel was then officially christened by Tilly herself, with the customary breaking of a bottle of champagne on her bow, and the new boat was blessed by local priest, Fr Coghley, before a gangplank was loered and family, friends and well-wishers were invited aboard to tour the impressive new build.

Given the long history between the O’Flaherty Brothers and LUYT—with the yard looking after their vessels for some years—going with LUYT for the new build, was an easy decision, according to Denis O’Flaherty. In terms of specifications, staying within the capacity available to them was crucial.

Tilly WD 3 is yard’s own design, developed in collaboration with Gaastmeer Design. In terms of design, the vessel is technically simple but reliably equipped. 6.05m in length, Tilly WD 3 has a beam of 6.75m, a moulded depth of 3.10m and a draught 4.3m. The vessel’s hull was constructed at Ibis Shipyard, before being towed to the LUYT yard at Den Oever for fitting out and completion.

The beamer’s LUYT manufactured six-drum trawl winch, type BT-H06-2-HA130-OH features two main, two derrick and two Gilson drums. The hydraulically driven and pneumatically controlled six-drum winch, is the thousandth LUYT winch produced by the yard over its 60-year history! Positioned in front under the main deck for better weight distribution, trim and stability, the design, according to skipper Johnny Bennett, will also mean less wear and tear on the wheelhouse.

Tilly WD 3 is also fitted out with two electric landing winches for landing and deck work. Fish handling equipment aboard —bins, elevator belt, conveyor belt, fish washer—was supplied by De Boer RVS. Refrigeration for the fishroom, which holds approximately 600 boxes, was supplied by Polar. The gear aboard the Tilly was made by BTG Nets and assembled by the O’Flahertys themselves. “Mick Bates makes them, whatever we need,” said Johnny. Safety equipment onboard was supplied by Atlantic Marine in Killybegs and CIV in Den Oever.

The complete wheelhouse electronics package onboard the O’Flaherty’s new build beamer was supplied and fitted by Stephen Jones, i-Fish Marine Electronics. Skipper Johnny Bennett choose the equipment and the layout after careful consideration, to ensure latest technology was fitted to help the vessel be safe and operate well.  A lot of time was spent to make sure as much as possible was visible & accessible from the skipper’s chair.

Two new radar models were chosen: the first being a powerful 25kW model mounted top of the forward towing gantry, networked into one of the Timezero plotters to allow overlay of the radar scan on the normal navigation chart. Each Timezero plotter onboard uses 3 x 24” glass screens allowing many different configurations of 2D, 3D depth, 3D hardness, radar, sounder, weather & routing. The second new radar model was a Furuno ‘solid state Doppler radar’, networked into the second Timezero plotter. This radar is the first in the world to use Furuno’s exclusive Target Analyzer function. Targets that are approaching the vessel automatically change colour to help identify potentially dangerous targets. Green echoes are targets that stay stationary, or are moving away from you, while red echoes are hazardous targets that are moving towards your vessel.

With both Timezero plotters being networked to radars and sounders onboard, and being online through the VSAT internet system, these plotters are quite different from the basic 2D plotting systems most people are familiar with. Now it is easy to load the current weather forecast for the next week and ‘play’ the weather shown in colour to easily understand what the weather will be like and plan the fishing trip appropriately. AIS vessels are shown onscreen from the boats own AIS receiver but also from Marine Traffic allowing you to keep an eye on the exact locations of where other vessels are operating. Radar scans can be viewed overlaid on top of the electronic chart giving a better understanding of the area around you. Radar targets can be tracked (ARPA’d) directly through the plotters and not having to select blobs using the radar controls.

The Charity & Taylor onboard internet/WiFi system was fitted to give online access for the skipper & crew whilst at sea which has become a must have these days. Careful consideration was given to the dome location to ensure maximum online time with no blockages and vibration. The audio systems in the wheelhouse and galley can play sound from their FM aerials, USB sticks, Bluetooth connected phones and from the local TV.

Tilly will be skippered by Johnny and his crew, Séan Hilliard (Arklow), Joseph Whitty (Passage East) and Bruno Pereira (Portugal) – all of whom have just moved over from one of the O’Flaherty’s other boats, the Emer Jane DA 37.

“It’s all down to fuel efficiency and then we only had a limited amount of tonnage also, so we had to build a boat to suit that,” said Johnny.

No doubt, designed with crew comfort in mind as well, the vessel is fitted with comfortable accommodation for four. The spacious and well laid out galley aboard is well equipped with all the mods cons.

In terms of comfort, Johnny said, “we have everything we need. All the mod cons.”

The journey home from the yard in Holland was rough, said Johnny, but the boat’s seakeeping capabilities got a good testing along the way.

“We were nicely battered by a gale nearly the entire way home. When we left we were steaming into a south-west gale and then coming up the English channel we had about 8 hours of fairly ok weather and then the rest of it was a gale. Coming around Land’s End we had a north-west gale”.

Glad to be home, but looking forward to getting started to find out if the boat is going to do what she was designed to do when speaking to The Skipper Johnny was keen to get away to sea.

Optimistic that she will, he said, “We did ok with the last boat we were on so…”

“We’ve done plenty of trials and she’s performing ok as far as trials are concerned, but the fishing side of it is obviously what we want to make sure of. We’ve tested our gear as far as testing engines and performance, we just need to fish our own waters now and see that she can do what she’s designed to do,” he said.

At the time The Skipper was going to print Tilly WD 3 had just gone to sea. She will mostly fish off the south coast in the Celtic Sea for megrim,  monkfish, lemon sole… “Anything we  have quota for,” said Johnny.

CUTTING OUT THE MIDDLE MAN

Tilly WD 3 is the latest addition to the O’Flaherty Brother’s impressive fleet, which today amounts to nineteen boats – comprised mainly of beamers, but also including several trawlers, two scallopers and the recently added Seiner,  Kennedy WD 135.

Since beginning their operations in 1987, the six O’Flaherty Brothers have continuously moved forward in the industry, creating local employment along the way. Brendan and John are skippers, Seamus, Denis and William are shore engineers and Michael runs their marketing and distribution operations in the factory.

From small beginnings operating out of the old net room of Kilmore Quay Fisherman’s Coop, they now trade from an impressive facility, featuring up to date loading bays, an ice plant and storage areas.

That which can be sold in Ireland, meaning the fish Irish consumers will eat, stays in Ireland – around 40%, much of which goes to the Dublin market, 60% goes to Europe. Most of what the Tilly WD 3 will catch will go to Bilbao, Barcelona and Madrid.

Saltees Fish itself directly employs 20 staff at Kilmore Quay, mostly locals or people from the surrounding areas, many of which have been working with the from the start. Indirectly, the company employs over 100 fishermen.

Saltees Fish also owns its own fleets of transport vehicles, for distribution and collection, meaning they can guarantee their product arrives at its destination in top condition at the right time.

Speaking to The Skipper, Denis O’Flaherty said, “Really that’s our priority. Looking after the fish onboard. Looking after quality. And then getting the fish to market as quickly and as freshly as possible.”

The Skipper team would like to wish the O’Flahertys, Skipper Johnny, crewmen Séan, Joseph and Bruno and all of their families every success with the new boat. Safe and good fishing to you all! 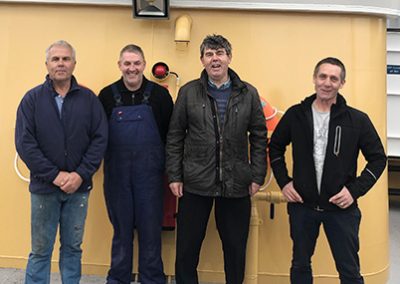 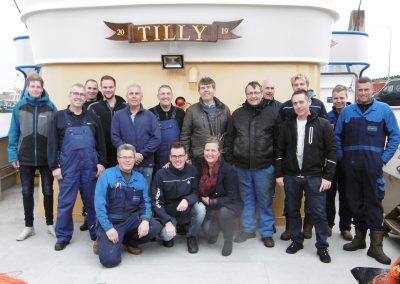 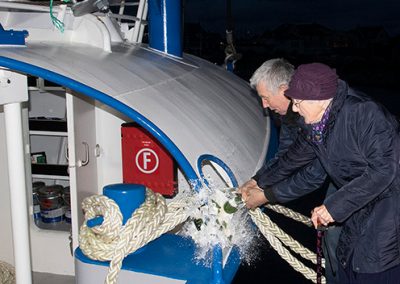 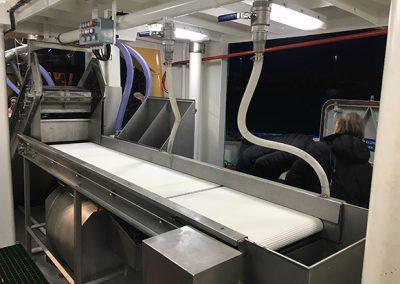 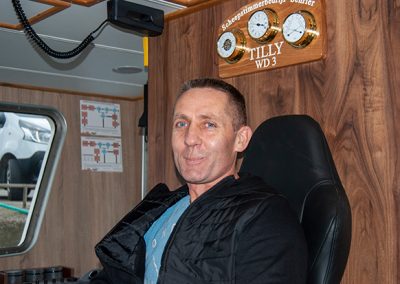 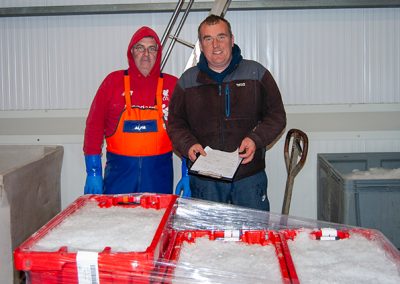 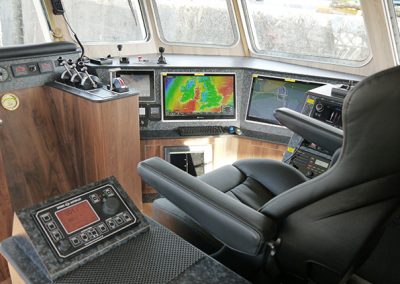