The Deeper These Octopuses Live, The Wartier Their Skin 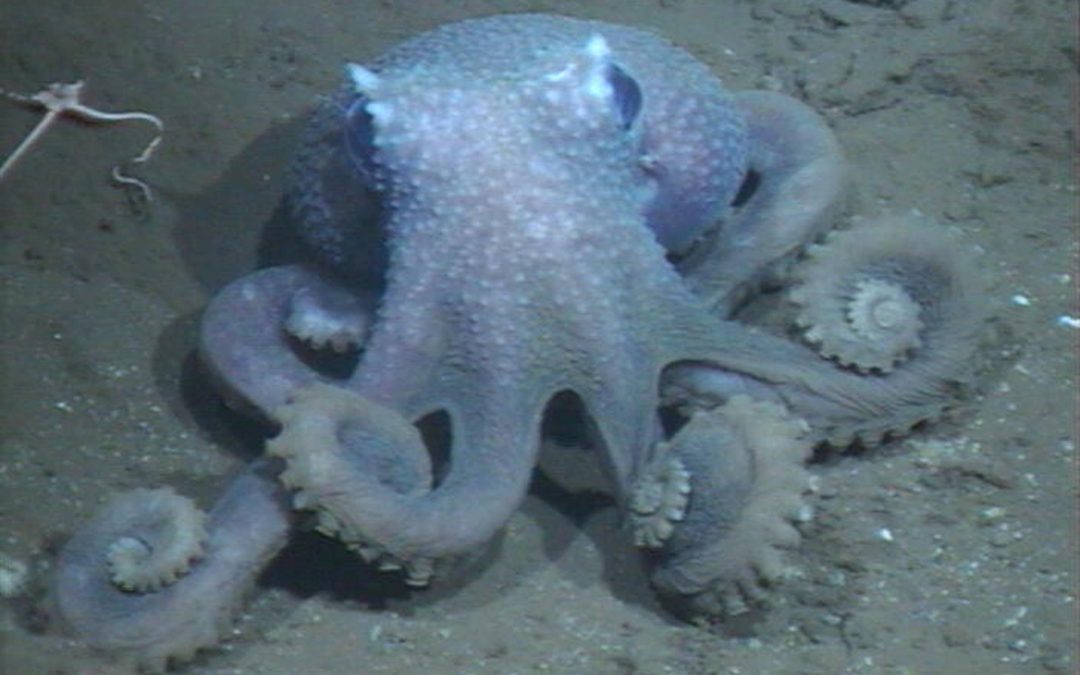 Professor Louise Allcock, Head of Zoology at NUI Galway is a co-author of a new study that found octopuses from deeper in the ocean had warty skin compared to their shallower smooth-skinned counterparts, with DNA sequences revealing they were the same species despite looking so different. The study was led by The Field Museum of Natural History, Chicago, and is published today (8 October 2019) in the international journal, Bulletin of Marine Science.

Deep beneath the ocean’s surface, surprisingly cute warty pink octopuses creep along the seafloor. But not all these octopuses look alike. While humans love a good “Is your skin oily, dry, or combination?” quiz, members of one octopus species take variations in skin texture to a whole new level. Some have outrageous warts, while others appear nearly smooth-skinned. Scientists weren’t sure if these octopuses were even members of the same species, and they didn’t know how to explain the differences in the animals’ looks. But in this new study, scientists cracked the case: the deeper in the ocean the octopuses live, the bumpier their skin and the smaller their bodies. DNA revealed that even though the octopuses looked different, they were the same species.

Co-author of the study, Professor Louise Allcock, Head of Zoology, Ryan Institute, NUI Galway, who analysed the DNA data, said: “We really weren’t sure what the DNA would tell us. Warty octopuses occur throughout the deep oceans of most of the world, including all the way down to the Antarctic, and there are real issues in determining the true number of species. From many locations we only have one or two specimens, because they live in really inaccessible habitats, so we had very little experience as to how much individuals of any given species might vary.”

Lead author, Janet Voight, Associate Curator of Zoology, Field Museum, said: “If I had only two of these animals that looked very different, I would say, ‘Well, they’re different species, for sure.’ But variation inside animal species can sometimes fool you. That’s why we need to look at multiple specimens of species to see, does that first reaction based on two specimens make sense?”

To figure out if the smooth and warty octopuses were the same species, the scientists examined 50 specimens that were classified as Graneledone pacifica, the Pacific warty octopus. Plunging deep into the ocean in ALVIN, a human-occupied submersible vehicle, Voight collected some of the octopuses from the Northeast Pacific Ocean. The team also studied specimens loaned from the University of Miami Marine Laboratory and the California Academy of Sciences. They looked at specimens from up and down the Pacific, from as far north as Washington State to as far south as Monterey, California, and from depths ranging from 3,660 feet (1,100 metres) to more than 9,000 feet (2,700 metres) below the ocean’s surface.

The researchers counted the number of warts in a line across each octopus’s back and its head and the number of suckers on their arms. They found that the octopuses from deeper in the ocean looked different from their shallower counterparts. The deep-sea specimens were smaller, with fewer arm suckers, and, most noticeably, bumpier skin than those from shallower depths. They found there weren’t two distinct groups; the animals’ appearances changed according to how deep they live. Comparing the octopuses’ DNA sequences revealed only minor differences, supporting the idea that they were all the same species, despite looking so different.

Voight adds: “Sometimes when animals look different from each other, scientists can be tempted to jump the gun and declare them separate species, especially in the deep sea, where very little is known about animal life and scientists often don’t have many specimens to compare. But looking different doesn’t necessarily mean that animals are members of different species; take chihuahuas and Great Danes, which are both the same species of Canis lupus familiaris. Dogs’ different appearances are due to selective breeding by humans, but in the case of the warty octopuses in this study, their different appearances seem to result from environmental influences, because their appearance changes depending on where the octopuses are from.”

Scientists aren’t sure why the variations in skin texture occur with depth. But they do have a hunch about the size difference.

Voight thinks that these octopuses usually eat creatures from the sediment on the ocean floor, passing food from sucker to sucker and then crushing their prey like popcorn. “There’s less food as you get deeper in the ocean. So these animals have to work harder to find food to eat. And that means at the end of their lives, they’ll be smaller than animals who have more food. If you’re a female who’s going to lay eggs at the end of your life, maybe your eggs will be smaller”, says Voight. Smaller eggs mean smaller hatchlings.

Support for this hypothesis comes from the number of suckers on the males’ arm that transfers sperm packets to females. Earlier research by Voight found that male hatchlings have a full-formed arm with all its suckers in place. The researchers documented that the number of suckers on this arm was much smaller in males from greater depth, and Voight hypothesizes it relates to egg size.

“The octopus hatchlings in shallower water, only 3,660 feet (1,100 metres), are bigger. Their eggs had more yolk. As the embryos grew, they developed farther inside the egg than the ones from 9,000 feet (2,700 metres), who were developing in smaller eggs. They had less energy to fuel their growth before they left the egg, so they made fewer suckers,” says Voight. Seeing these physical manifestations of octopuses’ food limitation provides a hint of how they might fare as climate change progresses and the octopuses’ food supply fluctuates.

Voight notes that this study, which shows that different-looking octopuses can still be the same genetic species, could help researchers down the line trying to identify life forms in the deep sea. Remotely operated vehicles collect video footage of the ocean floor, and it can be used to estimate the number of species present, if known what they look like. That’s why, Voight says, it’s so important to examine specimens in person and use characteristics you can’t see on video to identify species boundaries.