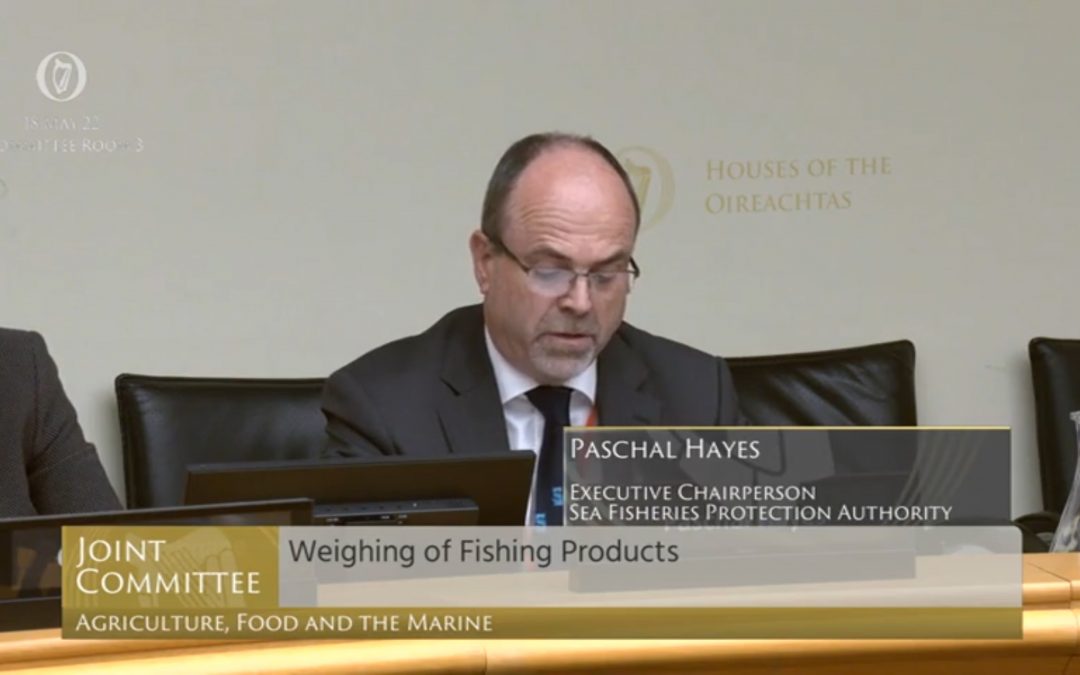 It stretches credibility to point never witnessed by many observers, the contents of Sea Fisheries Protection Authority (SFPA) opening statement to the Oireachtas Committee for Agriculture, Food and the Marine, so stated a very senior politician after the appearance of the SFPA.

The defence the SFPA presented is based on trying to convince us that everything is normal and there is nothing new to see here. But, it would be correct to suggest that over 230,000 landings of fish would have occurred in the north of Ireland over the past 25 years, these particular landings of fish made up of demersal, pelagic and shellfish were processed in Irish Fish processing factories during that period. Yet, only two landings of fish during this entire period warranted action on the part of the competent authority. In the words of the SFPA “to the lack of a common control plan between UK and Ireland” – covering the period “before or after Brexit “

The IFPEA consider this to be the 0.00001% rate of application for a non-existent or to this point a fictional regulation, which the SFPA are now trying to convince us and the Oireachtas committee existed all along – in the real world this is the equivalent to the schoolboys’ excuse “that his dog ate the homework”

In terms of the landing into Derry, the SFPA are in effect calling into question the work integrity of the competent authority of Northern Ireland, while at the same time the SFPA are adopting multiple incredible and alternative positions in terms of the status of the northern designated ports, the spirit of the protocol and status of Northern Ireland in the broader terms of the TCA – the situation is completely farcical if not downright bizarre on their part. The first hour of the committee proceedings showed to all that observed how weak and unbelievable the position adopted by the SFPA on these landings really is.

The SFPA, are intentionally targeting and singling out two fish processing factories due to the fact they highlighted the gross unfairness of the regime for weighing blue whiting enforced on them by the SFPA. This very point was made by numerous speakers at yesterday’s meeting and it was further stressed by the committee members that the media attention it seems has forced the SFPA to act for some unknown reason with the resulting actions of the SFPA not based on law or regulation but on emotion and that is what is completely wrong about these events.

This was tangibility demonstrated by the wording of their opening statement, when due to the intervention of Deputies Padraig Mc Laughlin and Pearse Doherty, the SFPA opening statement had to be withdrawn, as it was singling out processors. The inclusion of such remarks in the opening statement is further proof of the attitude and mentality within the SFPA, there is nothing new here in how the SFPA interact with industry and that is the real problem; this authority is rapidly becoming unmanageable in terms and to the extent it interacts with industry. The embarrassment of withdrawing their statement at least will demonstrate openly to all, the real side of the SFPA.

The IFPEA are shocked at how the SFPA seemed to think it appropriate to either base or describe their relationship between themselves as regulator and industry as being based on a “healthy friction”.

We for our part as an Association of fish processors and exporters, categorise our relationship with the SFPA as “professional and respectful “and there is absolutely no need to have friction as a term of engagement or for the basis for interaction between them as a control authority and the industry in general. To base your engagement with industry in terms of “friction” is self-defeating and confrontational in nature from the outset.

Initially, the SFPA stated Derry was outside of Ireland and that fish landings “could not be transported from outside Ireland to fish processing plants within Ireland “, and they are suggested these rules existed all along – even put it in writing. But, the SFPA are stating “that fish landings can take place without a common control plan and the competent authority of Northern Ireland are the agency with the authority on this matter”. So, the representatives of the SFPA clearly stated at the Oireachtas Committee hearing last Thursday, well that really clears thing up for us all.

It is easy to understand why various reports into the capabilities of the SFPA have come to the similar conclusions; that they are not fit for purpose and the dial has to be reset to nought. The Oireachtas committee appearance raised serious questions as to the immediate future direction of the SFPA, that ultimately will be matter for the Houses of the Oireachtas.

Independent oversight is immediately required for the SFPA, and if that requires legislative change as the Sea fisheries and Maritime Jurisdiction Bill is seriously flawed in that regard – that will be eventually a matter for the Dáil and our politicians to deal with.

Yesterday’s 3-hour examination of the SFPA by the Oireachtas committee has shown to the entire country the shortcomings of the SFPA, industry already knows them too well for we are working with them on a daily basis.