Campbeltown man Scott McKinlay and his crew steamed their new Typhoon 40 SKYE into their home port recently after the 3 day journey from Valentia Island.

Scott’s new Cygnus Typhoon 40 SKYE which was built and fitted out at the Cygnus Boats facility on Valentia Island and after successful sea trials was handed over to Scott and Crew.

SKYE is a 39’ft Cygnus Typhoon 40 with a 4.0mtr beam and a 1.3meter draft. The new Typhoon has raised superstructure mouldings which allowed for a higher deck and in turn a larger freeboard. 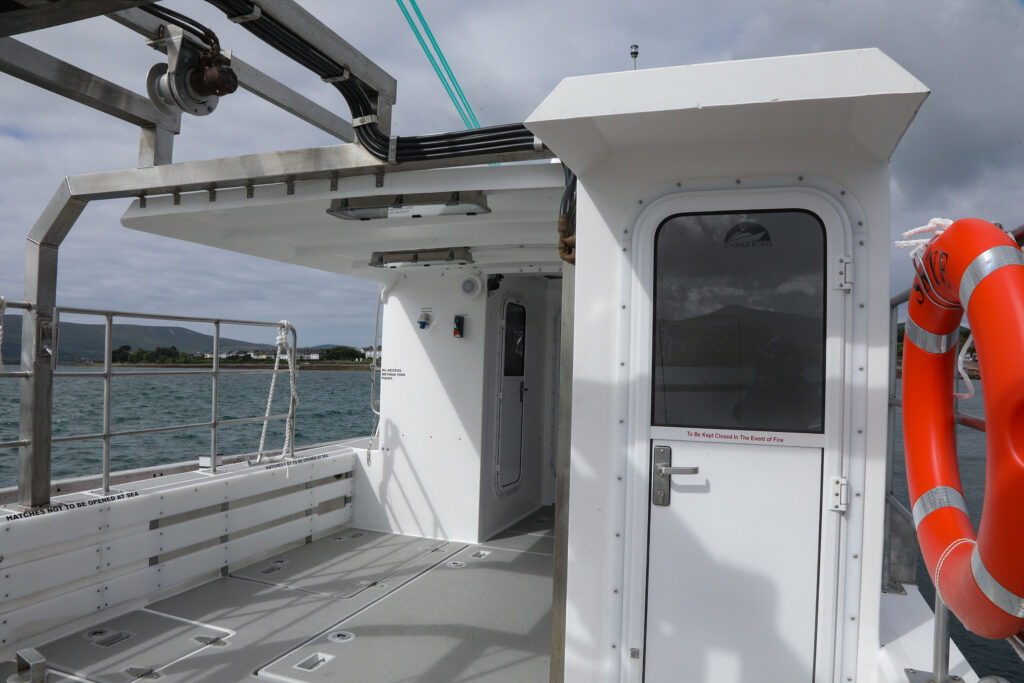 SKYE was built to replace the 50-year-old Halmatic 37 ‘’Hildona’’ which is taking part in Scottish Razor clam Trials.

When fishing for the Razors the boat and crew will be away from home for long periods of time so Comfortable accommodation and crew quarters were high on the list of priorities during the build. During the winter the vessel will be targeting  Crab and has been set up for the easiest possible transition.

The new Typhoon is powered by an Iveco Cursor C13 ENT engine supplied by South Shore Marine and Diesel Ltd and is coupled to a ZF 550-1A  1.97:1 ratio gearbox with a 2.25inch Duplex Shaft and 30” 4 blade prop which were supplied by Clements Marine. 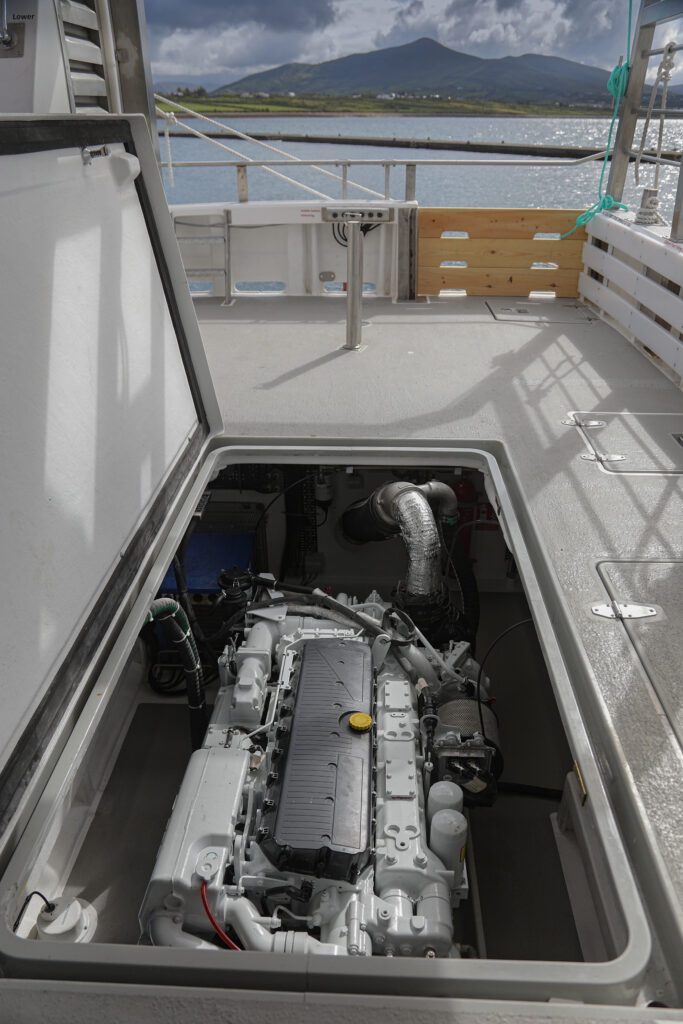 The vessels hydraulics are powered by a 100cc Variable displacement hydraulic load sense pump which is driven directly from a power take off at the front end of the engine which also drives the 1.5in Jabsco deck wash pump.  The deck wash doubles as an emergency bilge pump to all watertight compartments via an on-deck manifold.

The Vessel has a comprehensive hydraulic package with a K.K Hydraulics supplied 3000lb Hydro slave pot hauler a Spencer Carter Cargo winch on the landing derrick a second Spencer carter cargo winch on the aft facing fixed derrick and Side Power bow and Stern thrusters. Much of the hydraulic package was supplied by Derek Noble and all were fitted and commissioned by the yard. The Rexroth pump is a load sensing design that provides power on demand and keeps the load off the hydraulic system when steaming or idling.

The pot hauler Is mounted horizontally on a robust Stainless-Steel pedestal which is fixed to the wheelhouse back bulkhead, the hauler is slightly angled to starboard and aft to give the best possible hauling angle over the heavy-duty Stainless-steel gunwale roller with its operating lever under the pot table.

Outboard of the Pot table on the Starboard Gunwale is the boats secondary control station which is housed in a Stainless-Steel frame for protection. The secondary station has full operating functionality and includes the operating levers for the bow and stern thruster, the Second Kobelt control unit, Joy stick steering and a Rudder indicator. The large flush deck leads out to the portside stern shooting door. 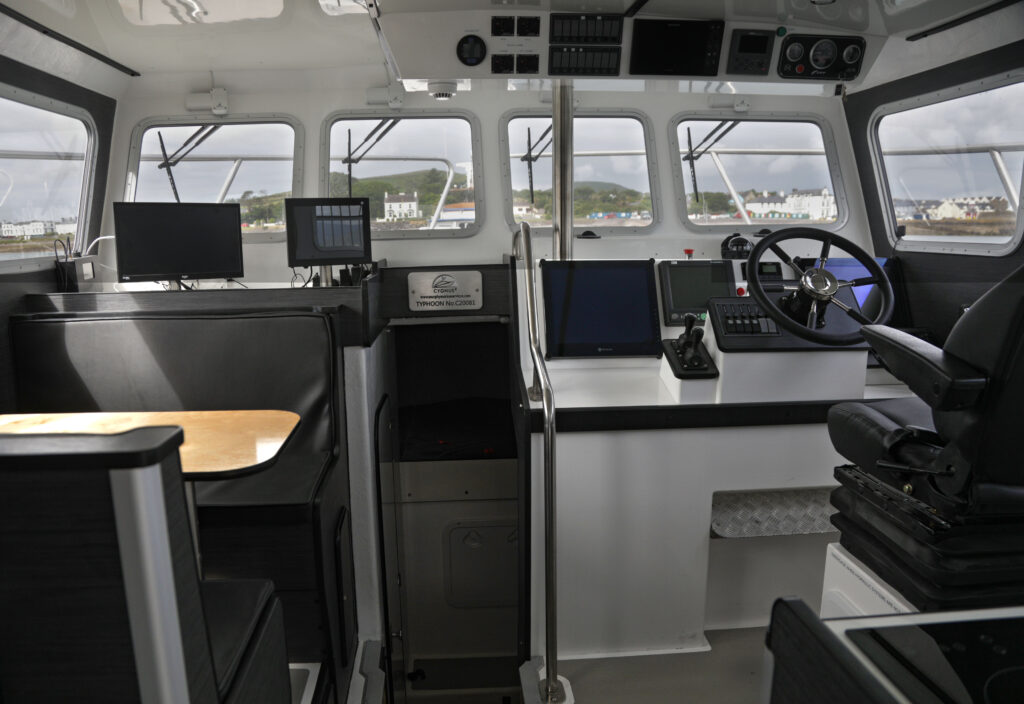 The boats gunwales are fitted with substantial all-round stainless-steel railings which link in with a Full width cat catcher. There is a Removable railing section aft of the control station for loading and unloading gear from the boat and the Gunwale in this section has stainless steel capping fitted.

The busy Engine room has a Large Flush Deck hatch over the Engine a small man size hatch to port and a ‘’Doghouse’’ access to starboard. The doghouse always allows engine room access even if the boat has a load of creels on the deck. A notable feature of the hatches is the trouble the yard went to with the substantial hatch drains which allow water to drain overboard rapidly.

As well as the main propulsion engine the space also has Kohler 25KW 3phase generator, a compressor and the Electrical equipment for the Razor fishing.  Forward of the engine room is the under-deck fish hold which is levelled out to maximize carrying capacity.

The fish hold has been completely insulated and has a refrigeration system fitted. The hold is accessed by a large flush deck hatch and as the vessel has a 2/3 roof shelter there is another hatch on the roof directly above the fish hold to enable the stored catch to be lifted out with the landing derrick. 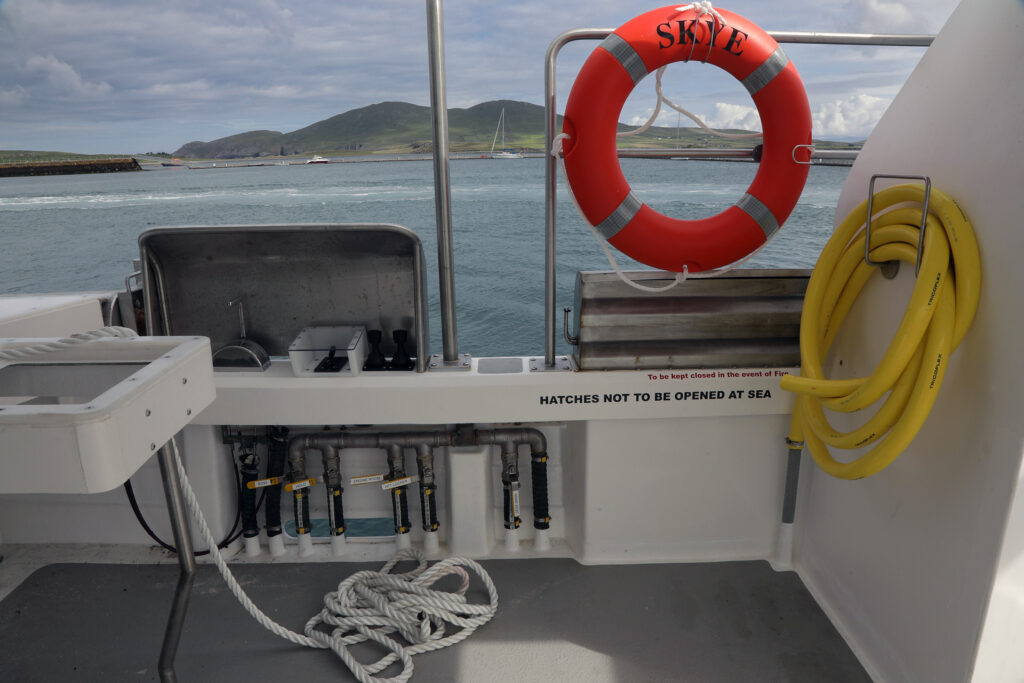 The New Vessel has a Comfortable wheelhouse and fore cabin with all the amenities of home. The Starboard helm position has a KAB seat beside an opening window. Behind the skipper’s seat is the Galley worktop which includes a stainless-steel sink, a 4-ring ceramic hob with a full size domestic oven underneath.

To Port is a Comfortable seating area that can accommodate at least 4 around the Galley table, behind the seating area is a full-size domestic fridge/freezer with a Microwave overhead.  The Forward cabin which is accessed by a small stair has four comfortable bunks and a spacious toilet/shower room to port.

The wheelhouse electronics package for “SKYE” was a supplied by SIRM of Fraserburgh and consisted of: A Sodena with 3D with 2 x 17” Monitors, a Furuno GP39 GPS Navigator, Hondex HE-7300DI Echosounder, RAYMARINE Axiom 9 Radar/Plotter, Simrad A2004 Autopilot with constant running pump, Icom DSC VHF, Marine Stereo and TV, CCTV Package with 12” monitor, EPIRB and AIS.

When speaking to the Skipper, Fionan Murphy from Cygnus boats  congratulated Scott, family and Crew on their new boat and wished all who sail in  “SKYE” a safe and prosperous future with many years of successful fishing. 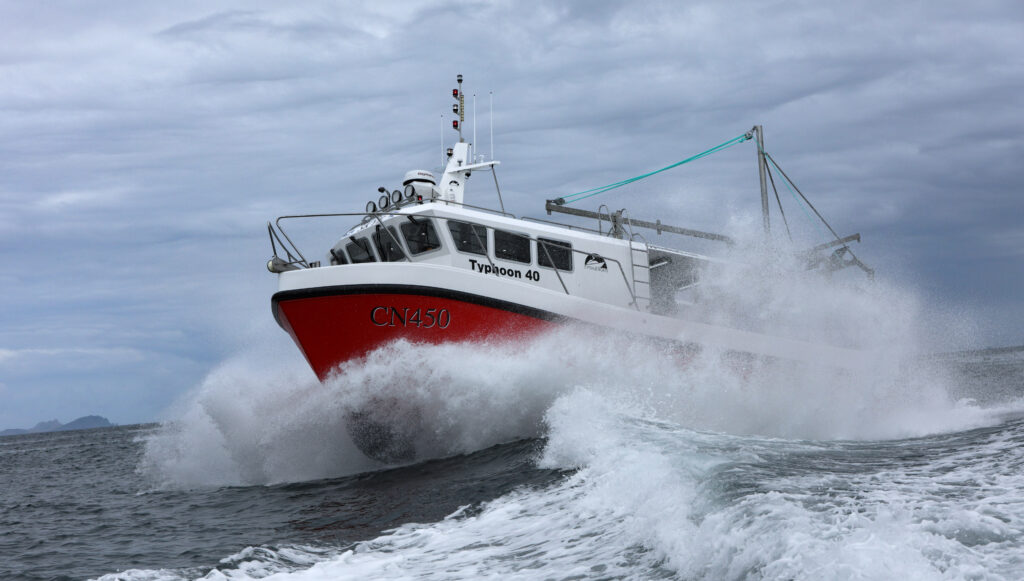 The Skipper team would also like to wish Scott and Family fair seas and good fishing! 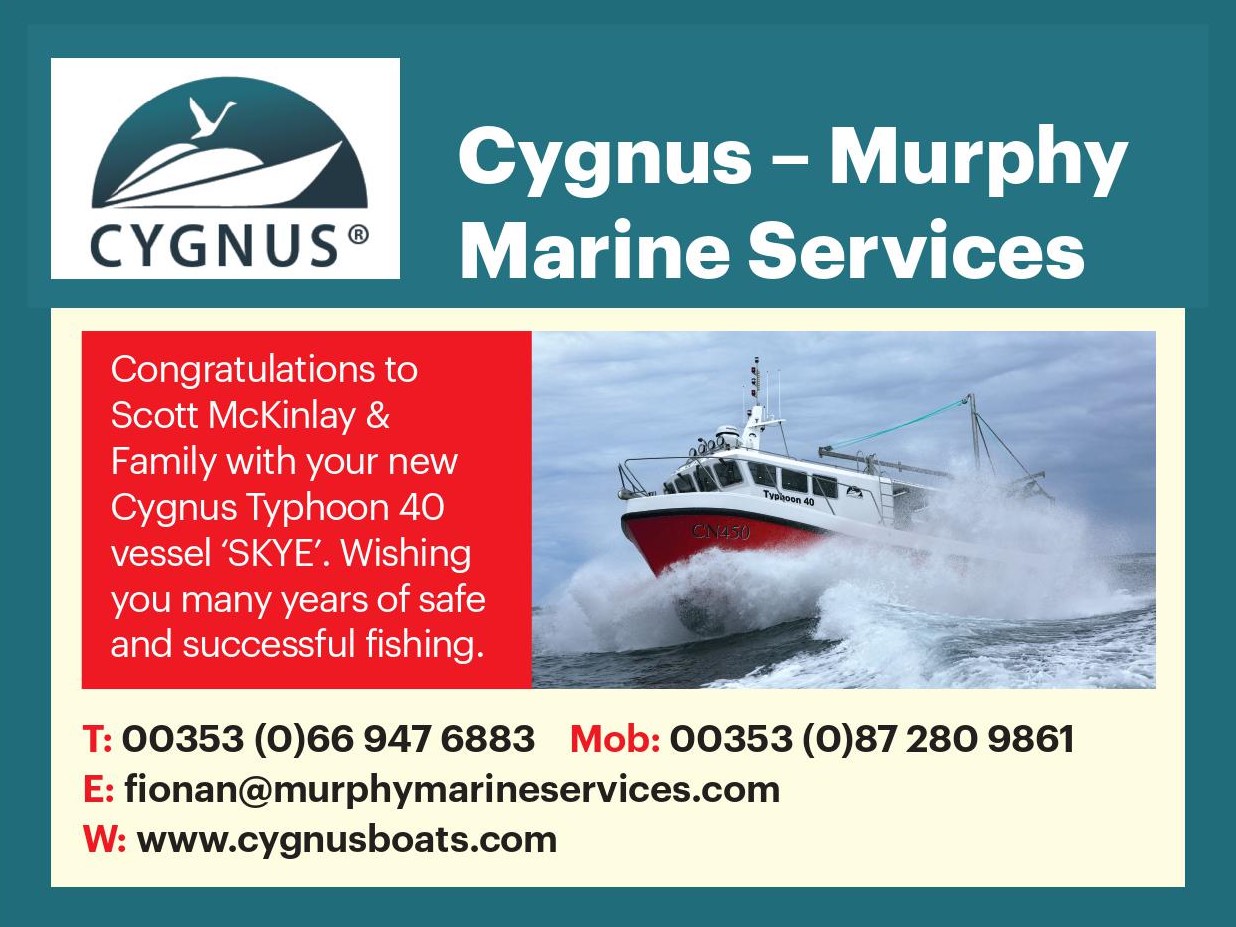