The latest delivery from Parkol Marine Engineering in Whitby, Winter of Ladram left its home port of Salcombe on its maiden fishing trip

EUROCLYDON is the second crabbing fishing vessel built by the yard in a space of only three years, following on from LEVANTER, GY7, with both vessels belonging to the same owner Stuart MacDougall of fishing company Euroclydon Ltd. The new build replaces the owner’s previous vessel of same name, built by Miller & Sons in 1987.

The tender for the EUROCLYDON was signed in summer of 2020, just six months after the owners took delivery of the LEVANTER. The vessel is a new design of vivier crabber fishing vessel designed between the yard and local Naval Architecture & Consultancy firm Macduff Ship Design. It features many similarities to the LEVANTER, with a similar arrangement throughout. However, with increased length, breadth, and depth, the EUROCLYDON provides noticeably more space all around to enhance crew comfort, sea keeping and fishing activity. 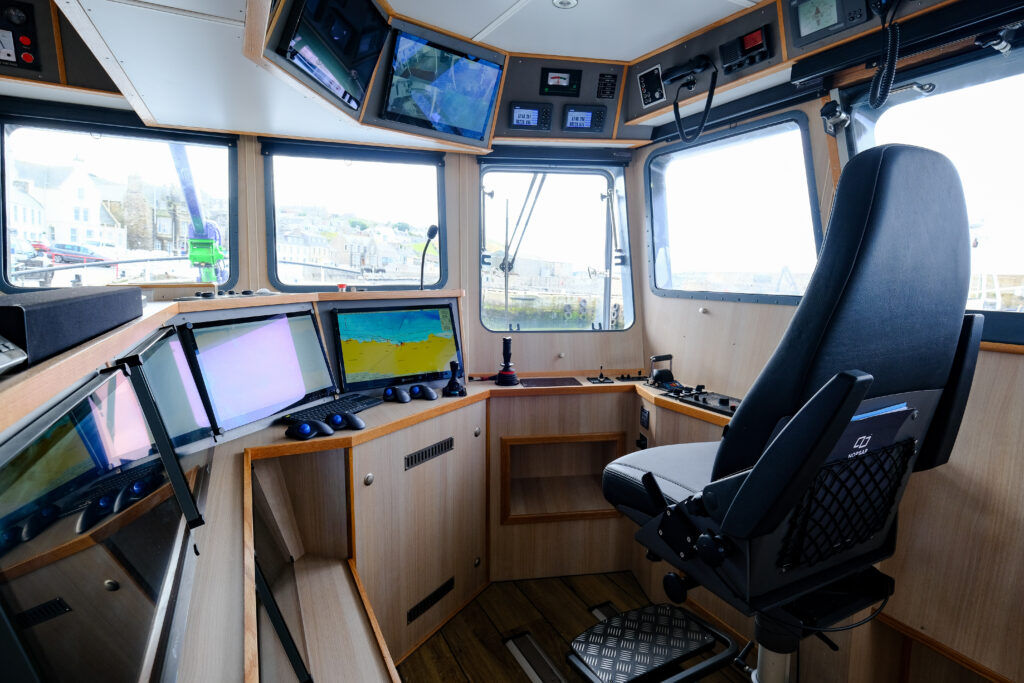 The design work began in summer of 2020 with consultation between the yard and owner to finalise the general arrangement to their exact needs. With the initial design complete, the construction plans were drawn up by Macduff Ship Design and submitted to the MCA for plan approval under their newly adopted construction standard, inherited from Seafish.

The Hull
The hull of EUROCLYDON up to main deck along with the aft accommodation casing and the forward section of the shelter is built from Lloyds grade A ship building plate. The mid part of the shelter where fishing activities take place, along with the wheelhouse and mast are built from marine grade aluminium to help reduce the vessels displacement. The hull form features a double chine hull form, transom stern and modern bow designed to cut cleanly through the sea with less energy leading to a reduction in fuel consumption and emissions along with increased crew comfort. 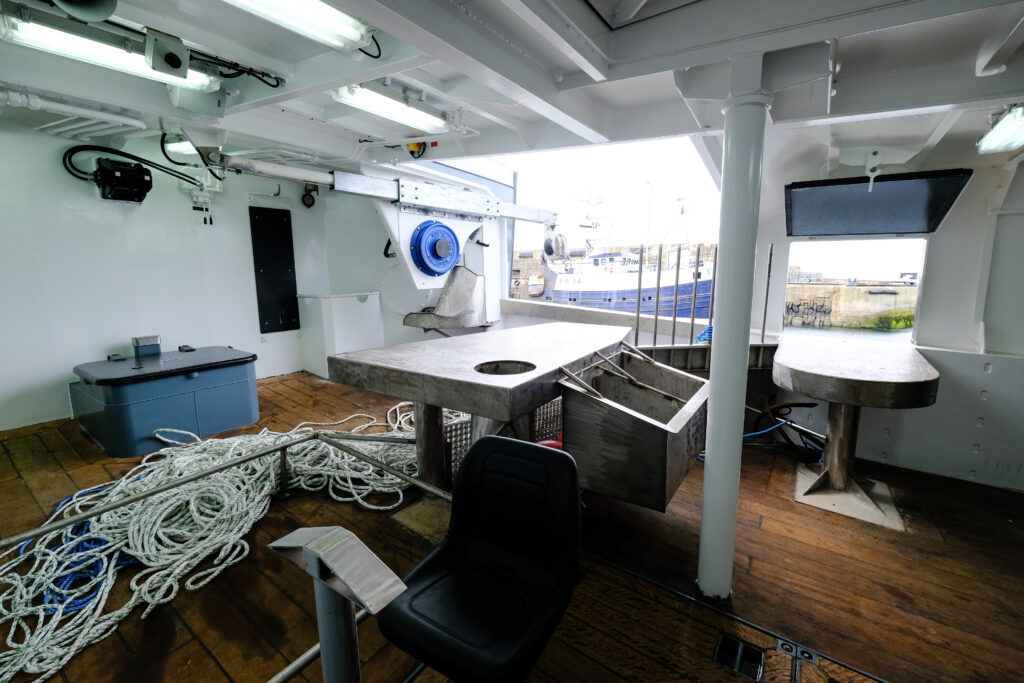 Above Deck
Above the deck features the accommodation area aft with galley/mess to starboard, WC aft and a two berth skippers’ cabin and dry locker/laundry to port. Forward of this is the large fully sheltered working deck where the pots are brought onboard, catch emptied into the vivier tank, and pots stacked up until ready to shoot again. The shelter is protected by a large hydraulically powered hatch. The hauler is mounted forward and leads to a block which is fitted at the end of a telescopic boom which extends outboard of the hull to keep the pots clear of the side when hauling up. Forward at main deck a weather-tight bulkhead is fitted, and a store space is arranged with shelving for storage and the anchor chain locker.

Above the shelter deck a large open deck space provides for generous stowage of pots when moving gear to the grounds. 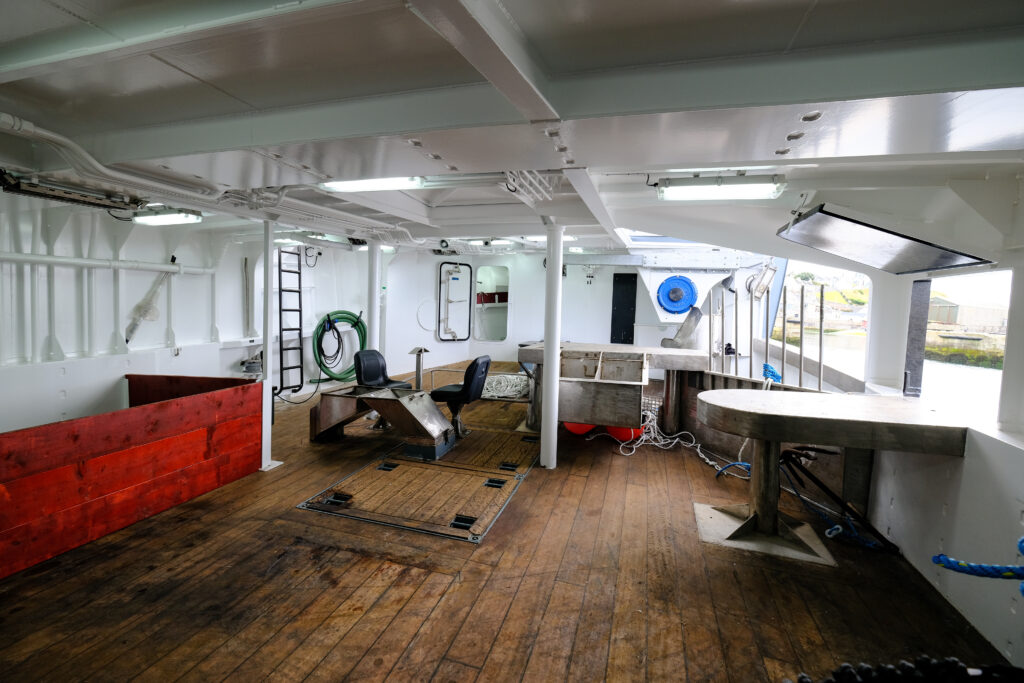 EUROCLYDON features some safety features built into the hull such as recessed foot/hand holds beneath the port and starboard fixed side ladders extending below the waterline and permanent guard rails around the wheelhouse perimeter. In addition, the owner preference of a raised shooting table is arranged in place of a low deck level side opening to keep the crew safe within the shelter.

EUROCLYDON is fitted with a large vivier tank with a capacity of over 40,000 litres of sea water. The tank is subdivided with fibreglass grating partitions so catch can be separated into different species/grades. The tank is serviced by two large electrically powered circulation pumps supplied by Bombas Azcue with the intention one pump is used in service and one on standby. Overflow pipes are arranged port and starboard, above the waterline, so the crew and skipper can visibly see when the pumps are in operation. 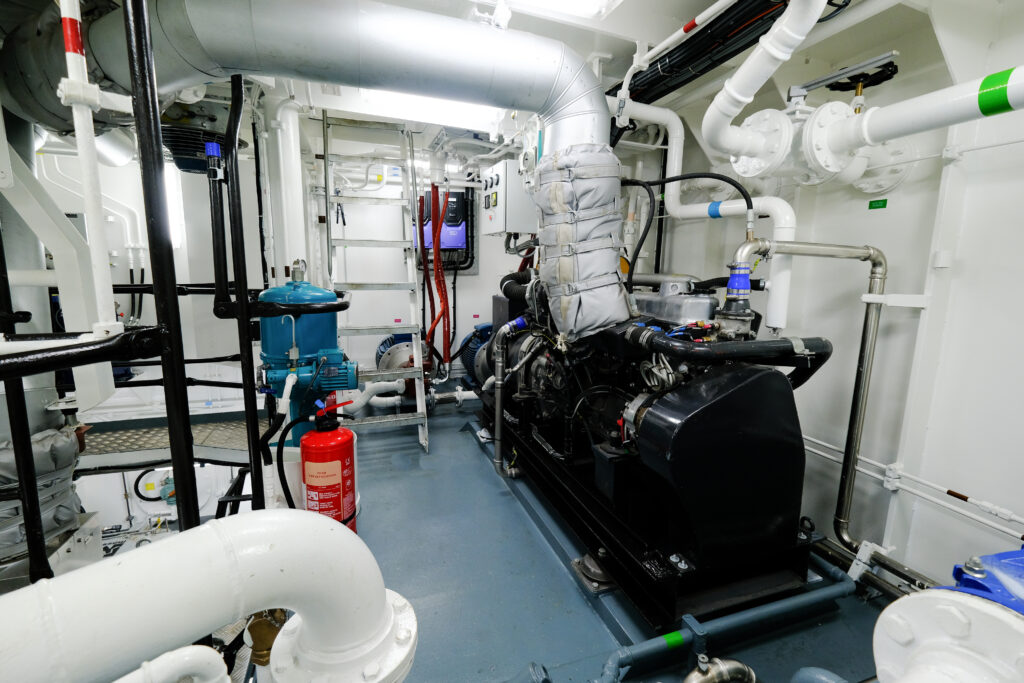 Propulsion
The propulsion setup of EUROCLYDON is based around an innovative, large 2000 mm diameter four bladed propeller designed and supplied by Wartsila. During the creation of the specification the yard put forth to the owners a Mitsubishi S6B3 with 320 kW output as the proposed main engine due to its success and fuel economy on other projects in the past. Wartsila were then asked to investigate the optimal propeller diameter and design for the vessel given the engine particulars and a range of gear reductions available. Upon their conclusion the 2m propeller was selected along with a Masson Marine W6000 gearbox with a large ratio of 8.705:1 which was calculated to provide optimal free steaming thrust per kW of power available. It was witnessed during trials that the vessel achieved a good speed for her length and the propulsion package performed smoothly with little vibration.

Hydraulics
A hydraulic system was designed by the yard and features a 1.5 t hauler provided by Britannia Engineering, a telescopic boom for the hauling block and large hauling hatch supplied by the yard, a KT120 bow thruster with 800 kg of thrust supplied by Kort Propulsion, and a MFB6 landing crane provided by Thistle Marine. Hydraulic power is provided by two large 37.5 kW motors which can powered separately, or simultaneously, by either of the vessel’s generator sets providing complete redundancy. 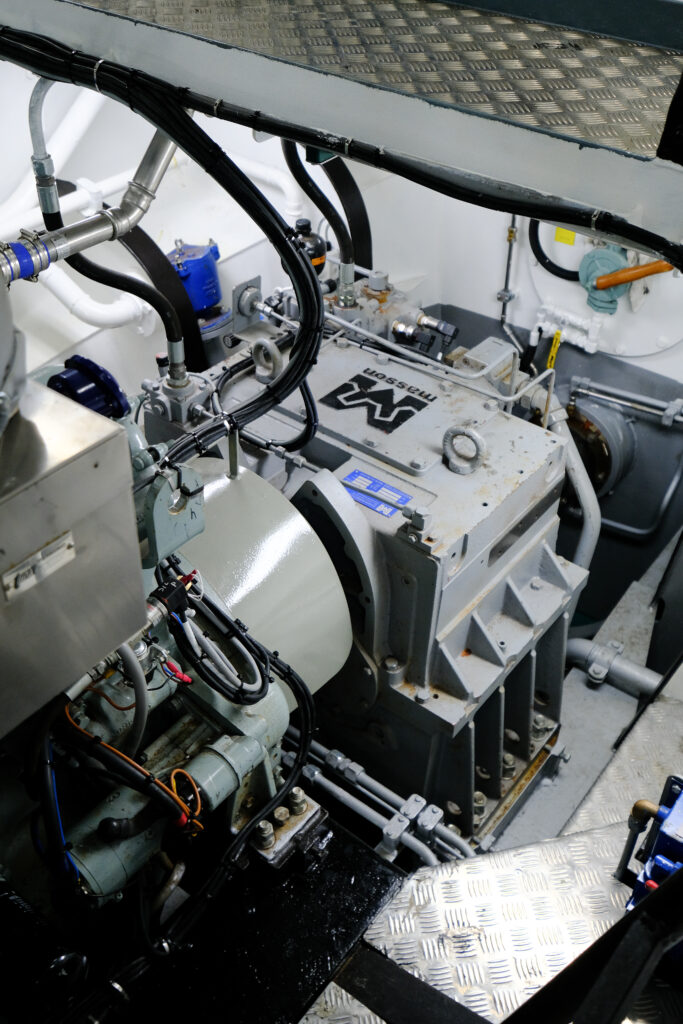 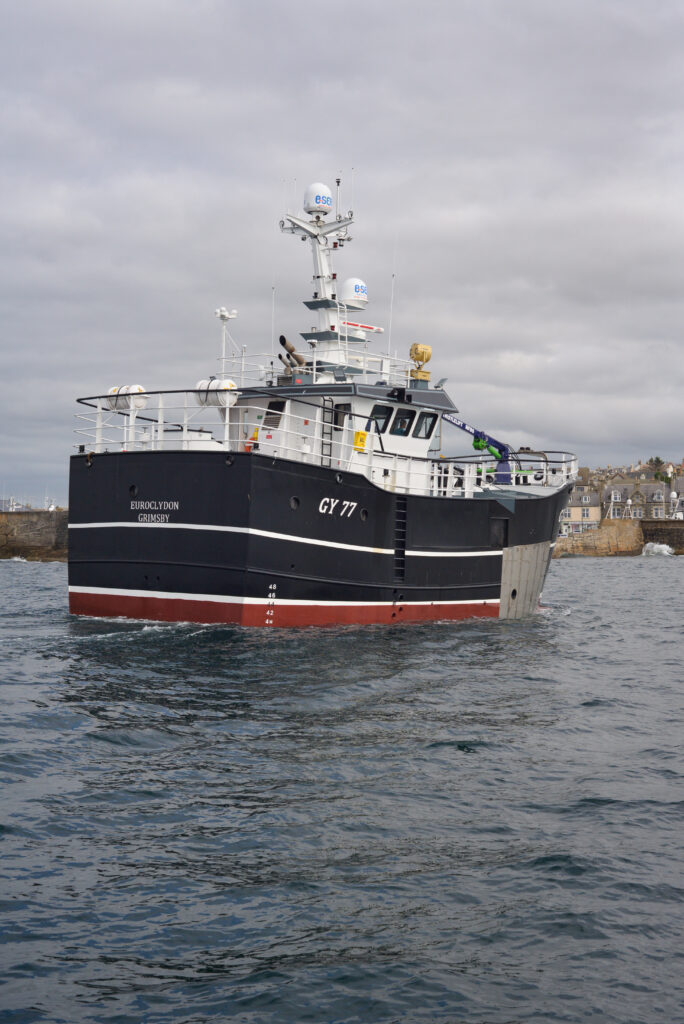 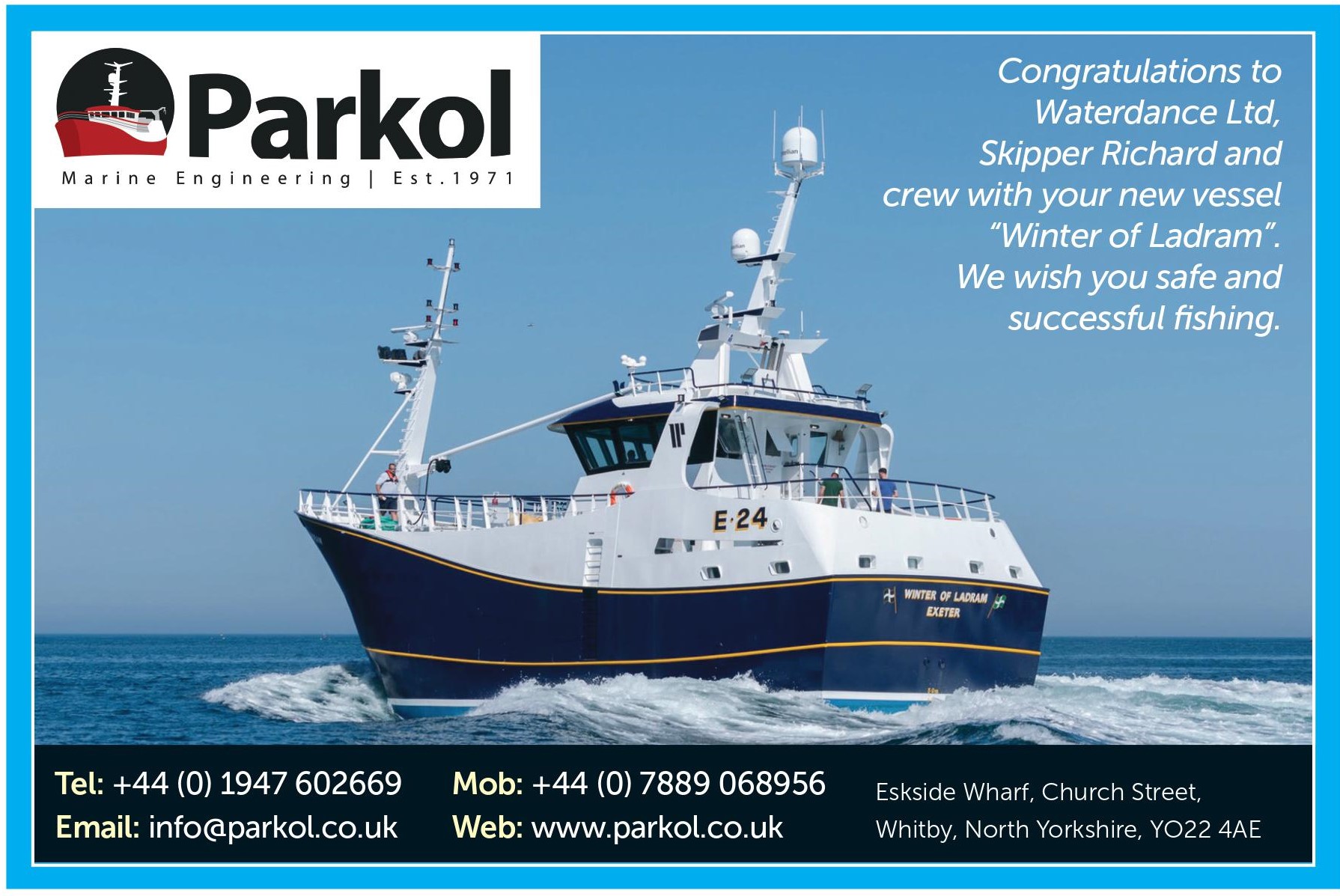