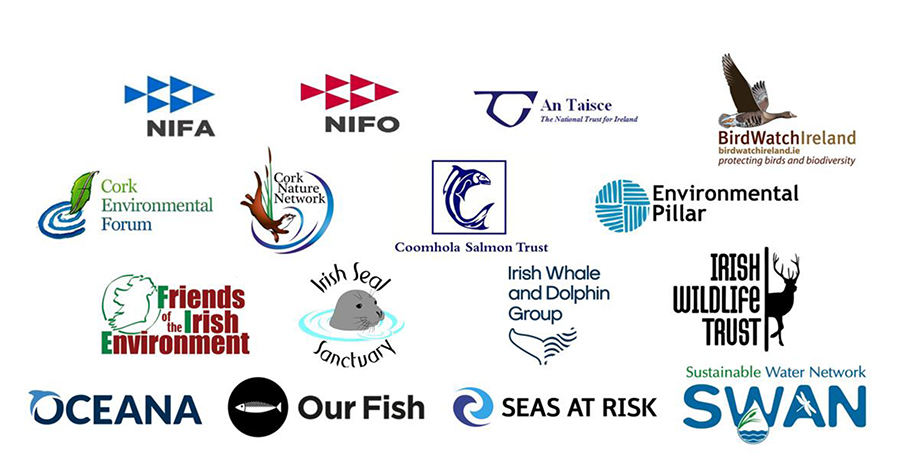 In an unprecedented response to the recent decision by Ireland’s High Court to overturn the ban on fishing vessels larger than 18m from operating within six nautical miles of the coast, 15 fishing and environmental organisations, have come together for the first time to call on Ireland’s Minister for Agriculture, Food and the Marine, Charlie McConalogue to take the steps necessary for the ban’s reinstatement.

The letter, sent to the Minister this morning, jointly signed by National Inshore Fisherman’s Association (NIFA) and National Inshore Fishermen’s Organisation (NIFO), Birdwatch Ireland, An Taisce, Cork Environmental Forum, Cork Nature Network, Coomhola Salmon Trust, Environmental Pillar, Friends of the Irish Environment, Irish Seal Sanctuary, Irish Whale and Dolphin Group, Irish Wildlife Trust, Oceana, Seas at Risk, Sustainable Water Network (SWAN) and Our Fish, points out that the policy directive, introduced in 2018, “was one of the most important fisheries policy shifts in the history of the Irish state and was broadly welcomed as being the right decision from a social, economic, environmental and a social justice perspective”, and was backed by expert analysis by the Marine Institute and the Bord Iascaigh Mhara (see full text of letter below).

“When Michael Creed TD announced his decision to launch a public consultation that ultimately led to the directive, he was very clear that he wanted to create opportunity for the inshore sector. The manner he planned and subsequently created that opportunity also had far reaching environmental and socio economic benefits for our marine environment and wider coastal communities and economies”, said Alex Crowley of the National Inshore Fisherman’s Association (NIFA) and National Inshore Fishermen’s Organisation (NIFO). “On that basis the proposal and the subsequent decision was broadly welcomed and supported by a broad spectrum of interests.”

“The fishing industry and environmental NGOs are often portrayed as opposing forces, however the reality is they have a common goal or vision for a healthy marine environment, therefore the issuing of this joint statement should come at no surprise”, continued Crowley. “Inshore fishers are acutely aware of the need for a healthy marine environment to support their businesses and way of life. As an economic sector and as a sector in society we are particularly exposed to negative environmental impacts.”

“Beneath the waves, a biodiversity crisis has been unfolding for many years”, said Fintan Kelly, Policy Officer at Birdwatch Ireland. “Overfishing has hollowed out marine ecosystems, and as fish stocks have collapsed, it is having a direct impact on the Irish fishing communities that depend on them. Ireland can and must do better. We are calling on Minister McConalogue to take decisive action to prioritise sustainable fisheries management in Ireland’s inshore waters on behalf of the vast majority of Irish fishers and coastal communities, instead of the demands of a privileged minority”

“The Minister must take steps to ensure that a ban on large trawlers within the 6 nautical mile  limit is brought into effect as soon as possible, while ensuring that all affected stakeholders are afforded the right to consultation as highlighted in the court ruling”, concluded Kelly.
“This is a classic case of a technicality tripping up a brilliant idea. The Irish government can realise the huge environmental and social benefits of protecting Ireland’s coastal waters from industrial fishing and deliver on their ambitions to halt the biodiversity and climate emergency, by taking the necessary legal steps to reinstate the ban as a matter of priority”, said Rebecca Hubbard, Program Director of Our Fish. “Reinstating the ban would actively help support hundreds of low-impact fishers and their coastal communities, deliver massive environmental benefits, and set an impressive example for other European countries to follow”.

The Letter to the Minister States:

To: Charlie McConalogue, Minister for Agriculture, Food and the Marine

Re: Joint statement in relation to the High Court Judicial Review on restrictions on trawling activity inside the 6nm limit

Responding to news that Ireland’s High Court has found that the ban on vessels larger than 18m from operating within the country’s six nautical mile inshore waters was void and of no legal effect, our organisations representing the interests of a healthy marine environment and a sustainable inshore fishing sector call on you to take the necessary steps to reinstate the ban.

The policy directive introduced in 2018 was one of the most important fisheries policy shifts in the history of the state and was broadly welcomed as being the right decision from a social, economic, environmental and social justice perspective. According to the Department of Agriculture, Food and the Marine, the majority of the over 900 stakeholder submissions made in response to the Minister’s review of fishing access inside the 6 nautical mile zone (6nm zone) supported restrictions on large trawlers based on environmental, economic and gear conflict issues.

The rationale behind the ban was supported by expert analysis by the Marine Institute and the Bord Iascaigh Mhara. These reports highlighted that restricting the access of larger vessels inside the 6nm zone would lead to improved protection of coastal environments and essential fish habitat, benefitting marine biodiversity and commercially exploited fish stocks. They highlighted the socio- economic benefits for the smaller inshore vessels, that constitute the vast majority of Ireland’s registered fishing vessels. The potential benefits included diversification opportunities, more jobs, and added value of landings. Improved management of inshore waters could be achieved by aligning fishing more closely with local ecological and environmental objectives and by reducing conflict between mobile and static gears. For coastal communities and consumers benefits could include a strengthening of the link between local fish resources and local economies with spin-off benefits for the sustainability of supply chains and local businesses.

All these potential benefits remain within reach. It is deeply disappointing and extremely worrying to us that the new dawn in the management of our inshore environment is under threat from what appears to be a technicality. The Policy Directive created a huge opportunity for the inshore sector and if that opportunity is to be denied, then the sector in its current form faces a very uncertain future and possibly a complete collapse.

We call on you to take decisive action to prioritise sustainable fisheries management in Ireland’s inshore waters in the interest of the vast majority of Irish fishers, coastal communities and marine wildlife, instead of the demands of a privileged minority. 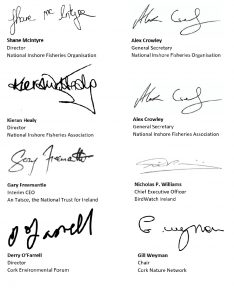 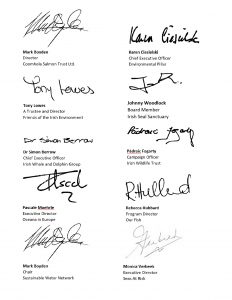