Five years down, three to go in photographer’s RNLI journey 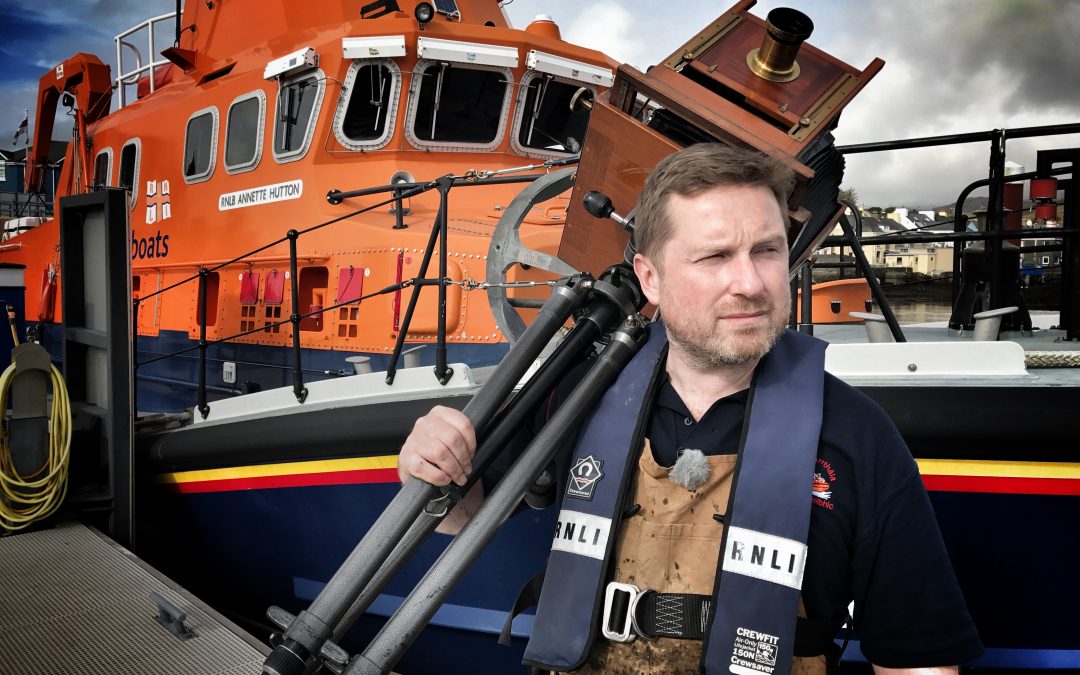 Five years ago, a man driving an ambulance he bought on eBay turned up at a lifeboat station hoping to make a portrait of the volunteer crew on a glass plate using a 115 year old camera.

Although Jack Lowe had been practising the Victorian photographic technique at home for a couple of years, this was to be the first time he would put his skills to the test.

He had persuaded the RNLI, the charity that saves lives at sea, to let him visit all of their lifeboat stations including 46 in Ireland to photograph them using the unusual photographic process, which is called ‘wet plate collodion’.

He had put a halt to his print-making business to devote himself to this new project; bought an old ambulance on eBay to convert it into a darkroom and stocked up on glass plates and litres of developing chemicals.

Recalling the start of the project, Jack Lowe from Newcastle in England, remembers his feelings:

“On that dreich and stormy Monday, my nerves were truly jangling. I knew I’d come up with a fantastic idea and I’d publicly shared what I intended to do. Friends, followers and loved ones were rooting for me.

“The pressure was on and I felt very aware that so many great ideas fall by the wayside simply because they turn out to be too difficult to execute.

“In those moments, it was time for me to turn my words into actions and I was determined to succeed. As the project’s grown in stature over the years, it’s a determination that’s only grown stronger and stronger.”

Five years later, Jack has photographed 147 operational stations including to date 26 Irish stations, over 2,000 RNLI volunteers – and around a dozen dogs, who are often included if their owners are on the crew!

He has travelled about Ireland and the UK in ‘Neena’, driving over 35,000 miles, equivalent to nearly one and a half times round the world.

He and ‘Neena’ have also taken to the water, travelling by ferry to some of the furthest outposts of the RNLI.

His provisional end date is the latter half of 2022, so there are still three years of photographic adventures. Jack has still yet to journey to some of the RNLI’s more remote stations, like those on the West Coast of Ireland.

His remit has broadened too – when he first started, he planned to make three images at each station: the crew, the view from the station and the Helm or Coxswain. But now he also uses his time at each station to capture portraits of women crew members and station mechanics, in order to highlight their presence as part of the RNLI’s lifesaving family.

In addition to that, he makes sound recordings: interviewing crew members about their experiences and capturing the ‘behind the scenes’ stories of the Project.

This year, Jack plans to photograph 30 more RNLI lifeboat stations, bringing the completion of this unprecedented odyssey truly within reach.

But it hasn’t all been plain sailing. When Jack completed his 100th station, Valentia in Ireland in September 2017, he revealed to his social media followers that he was struggling to keep going. His struggles were physical, emotional and financial – as the Project is largely self-funded.

Since then, he discovered the crowd-funding platform Patreon that allows people to support him by contributing a monthly amount, starting from a few pounds a month. This support has allowed him to continue his work on a more secure financial footing.

Jack, who is the grandson of Dad’s Army star and fellow RNLI supporter Arthur Lowe, said: “Ultimately, I’m honoured beyond words to be making this archive. It’s a privilege spending time with so many lifeboat volunteers, preserving their bravery and devotion for future generations.

“This journey is unprecedented in so many ways. The further I travel, the deeper the body of work becomes on just about every level and in ways that I could never have foreseen or imagined.

“When looking at a freshly-made crew portrait last year, a lifeboat volunteer said to me, ‘We look like those heroes of old’. I replied, ‘That’s because you’re the same people.’

“The Project closes the circle of photographic and RNLI history and gives these unsung heroes a fresh spring in their step and a sense of renewed pride.”