Fishermen Unite To Fight For The Future 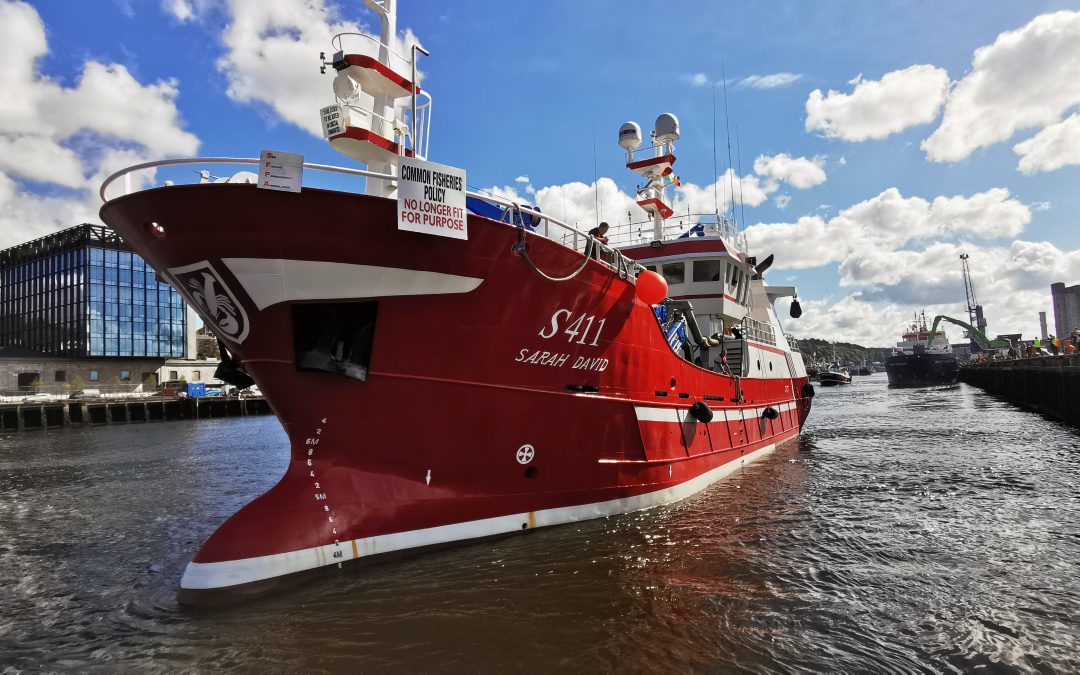 A flotilla of over 60 fishing vessels steamed into Cork City on the 26th May to protest over quota cuts, the Brexit Deal, SFPA failures and the disastrous EU Common Fisheries Policy.

The flotilla consisting of boats from Dingle, Castletownbere, Baltimore, Union Hall, Ballycotton, Kinsale, Dunmore East, Crosshaven, Kilmore Quay and other fishing communities steamed in single file from Roches Point, at the mouth of the harbour, to the docks in Cork city centre for a rally that was attended by nearly 1,000 fishermen, friends and family. 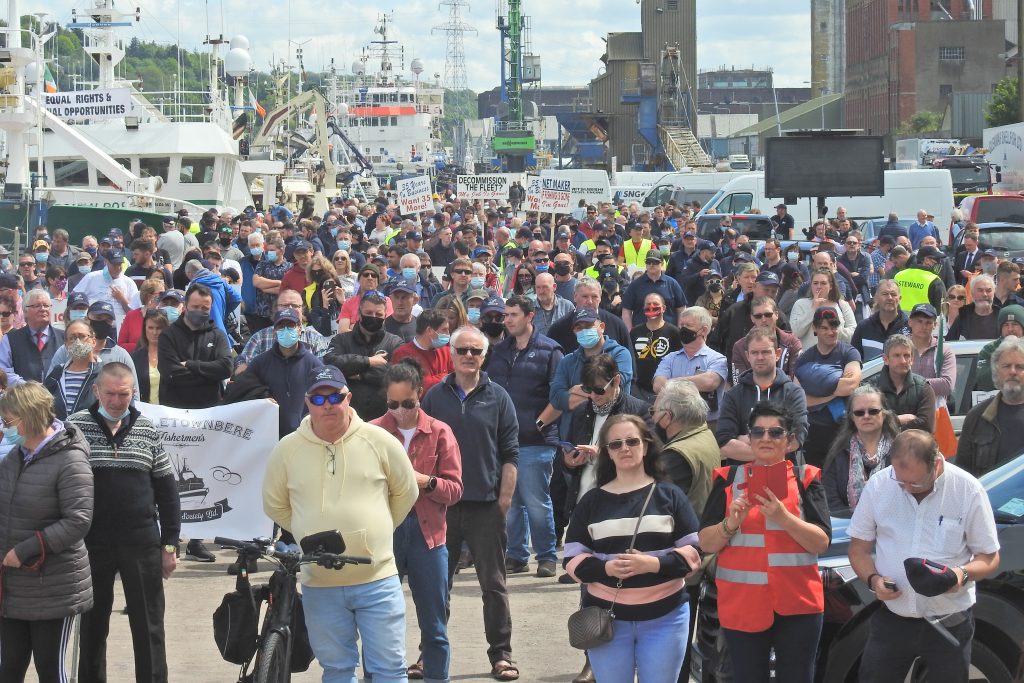 The rally was addressed by Fishing Reps plus 2 West Cork TD’s and the tone of the speeches was defiance and resolution to keep demanding change.

Afterwards, 15 skippers and crew members accompanied by the large crowd marched to the office of Taoiseach Micheál Martin in the city to hand in a list of their demands.

The fishermen’s demands were as follows 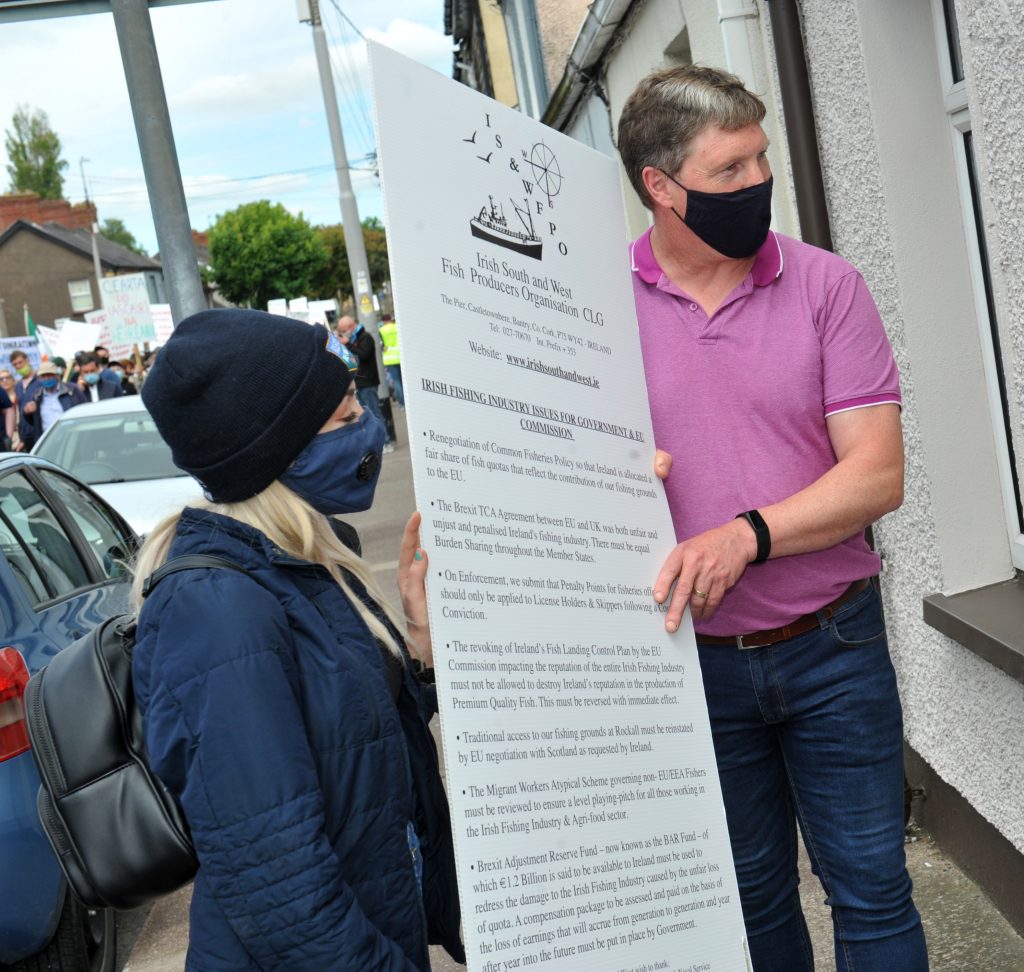 Patrick Murphy, CEO of the IS&WFPO, said the Brexit deal agreed on December 24th last between the European Union and the UK will result in Irish fishermen losing millions of euro in earnings if they are not given a fair share of the fish that swim in Irish waters.

He contrasted the situation in the UK, which will be able to fish for 75 per cent of the fish in their waters as a result of the Brexit deal, with that of Irish fishermen who are limited to fishing just 15 per cent of the stocks in Irish waters.

“Moreover, it is estimated that job losses of 4,000 or more in both the catching sector at sea and the processing sector onshore will inevitably follow these savage cuts,” said Mr Murphy.

“Fishermen don’t want to be in this situation. It is not what they want to be doing, but they are left with no choice; things are so bad,” according to the organisation’s chief executive.

“This the fact. This is what we want to show and tell to the public. Fishermen are putting themselves before the public, to show them the boats they have, the huge investment, creating jobs, the families with long traditions who face being forced out of fishing.

“The fishing industry is a vital part of our coastal economy and we need community support. It is a dangerous job which they do every day and they deserve better treatment and recognition for it.”

“Despite all their promises, the government has not achieved any improvement in the situation. The EU has continued to support the bigger fishing nations in exploiting Irish waters,” according to the ISWFPO.

“There should be a renegotiation of the Common Fisheries Policy so that Ireland is allocated a fair share of fish quotas that reflect the contribution of our fishing grounds to the EU.” 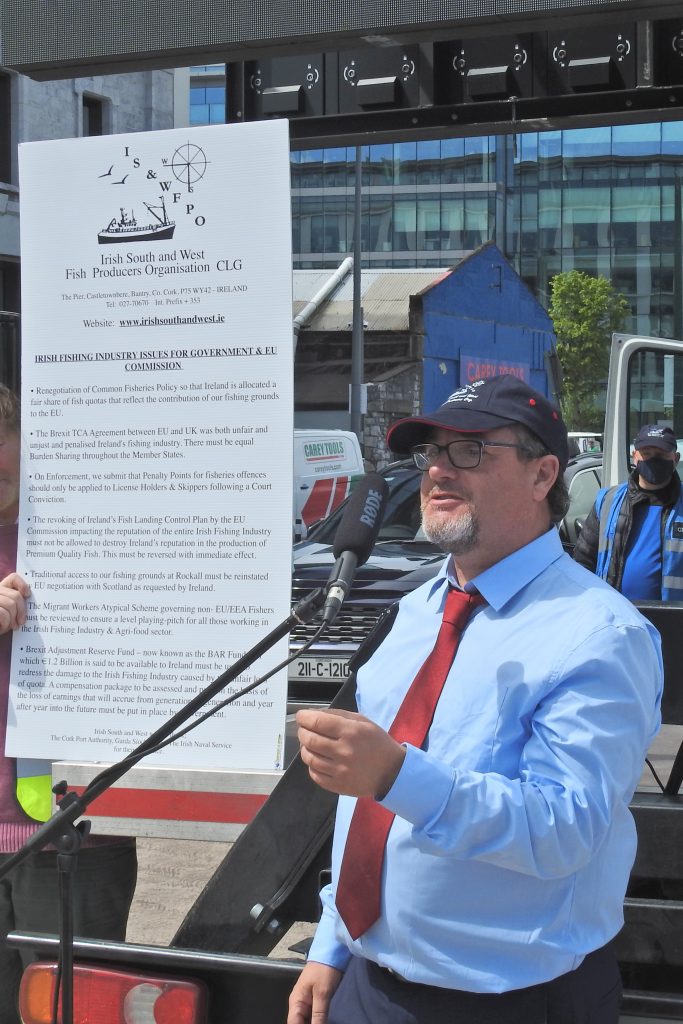 When asked about the protest Minister for Agriculture and the Marine Charlie McConalogue acknowledged that the Brexit trade deal will see quotas reduced to 15% on fishing quotas between now and 2026, which is the “challenge and pain” of what fishermen face.

“Obviously Brexit posed a massive threat to fisheries, a third of all the fish we catch was caught in British waters, so a no-deal would have been quite disastrous for the sector.

“But that’s not to take away at all from the outcome that has impacted fisheries in a way that it hasn’t impacted other parts of the economy.

“And that’s why I’ve established a taskforce to bring together all of the voices in the sector to advise the government how we can invest in the sector in the time ahead, how we can mitigate the impact that’s there and also maximise what is a tremendous marine resource we have,” he said.

“The minister says it’s ‘a challenge’. A challenge to me would be a soldiers climbing out of the trenches at the Battle of the Somme to face the machine guns, that’s the challenge, we’re being annihilated here.”