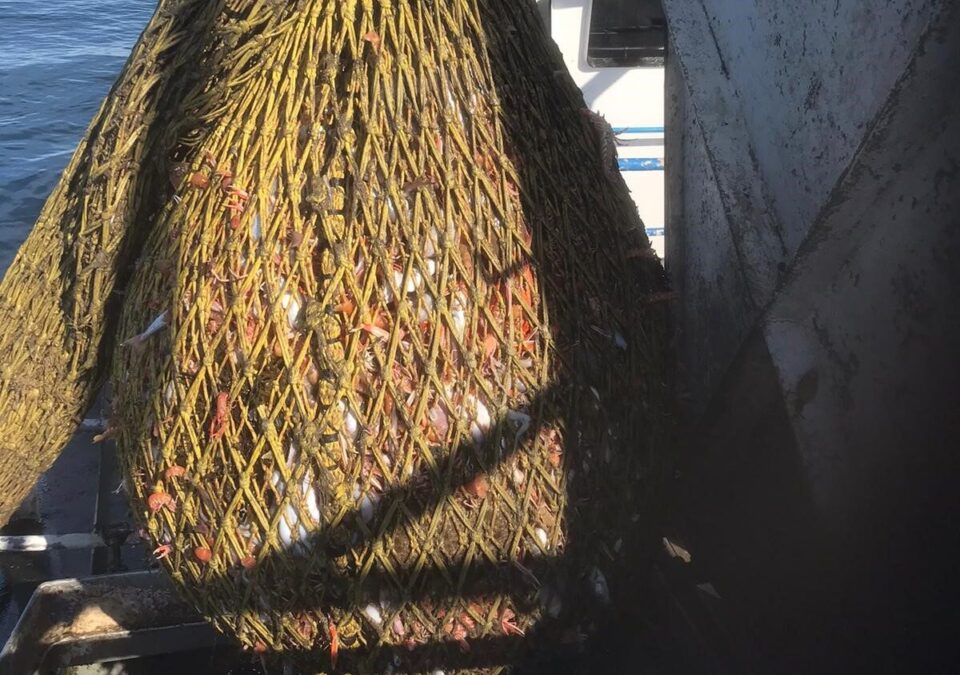 Scottish Skipper Expo exhibitor Euronete Portugal SA was challenged to produce for the industry a new netting that had the following characteristics: strength, abrasion resistance, and shrinkage resistance. The result from the Research and Development Team at the factory in Maia Portugal is Euroline TIPTO.

Several vessels were keen to trial Tipto netting with its distinctive yellow and orange colours.

The fishing vessel Success 111 – WY 212, skippered by Andrew Leadley, trialled Tipto 5mm Single Tipto with 103mm Inside Mesh (the minimum legal mesh size required being 95mm inside mesh). Two codends with lifting bags were produced by Caedmon Nets of Whitby and fitted to the trawls in January 2021.

The skipper would usually need to replace competitors’ codends after five months, however after six months fishing, these Tipto codends remained in fantastic condition, and the mesh size remained above the legal requirement. A full inspection of the codends was conducted with extremely impressive results. There was very little sign of abrasion and the codends looked as though they had only just been fitted to the trawls.

Four Omega gauge measurements of the mesh size were conducted – the result being 99mm Inside mesh on all the measurements made. The Tipto codends continued to be used, with the skipper monitoring the codends. After nine months on the trawls, the codends were still in fantastic condition and the mesh size remaining legal; the lifting bags needed replacing as they had suffered from abrasion. The codends went ashore for new lifting bags fitting – the codends were in good enough condition to be refurbished and returned to the Success 111 – and they remain aboard the ship today with a date for considering them to be replaced still not determined. Tipto codends have already lasted twice that of any competitors codends to date.

Skipper Andrew Leadley described them as “the best codends we have ever had!”

More Tipto trials are being conducted on the south coast by Coastal Nets, involving Tipto in 3.5mm netting. Feedback from various skippers after six months with Tipto in the trawls is that they are very happy with Euroline Tipto – and the netting still looks brand new. Everyone who has tried it says it is nice netting, easy to work with, good abrasion resistance and no discernible shrinkage.

Euronete UK is now expanding the range of netting references being held in stock with a view that Tipto netting does deliver everything that was requested from the netting initially and more.

Euronete UK says: “It is the best abrasion resistance netting in the market and with the highest Minimum Breaking Load compared to other similar netting from any competitors, and fantastic mesh stability against shrinkage and sand penetration.”

Further Tipto trials are being conducted in Brixham, Newlyn, Peterhead, Fraserburgh, and Lerwick to name just a few ports where Euroline Tipto is planned to be introduced.