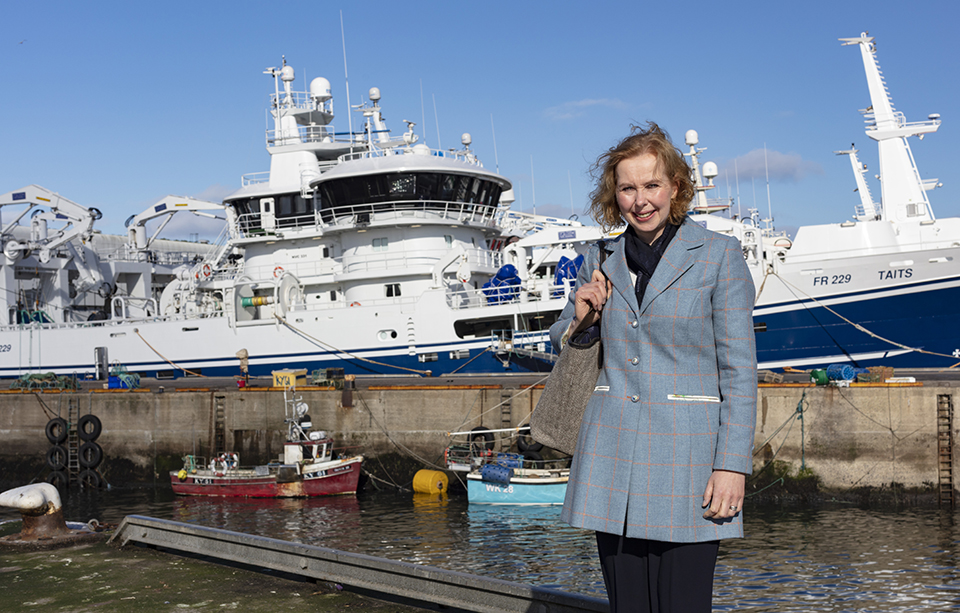 SFF chief executive Elspeth Macdonald has today written to the Prime Minister voicing the industry’s anger over the mounting financial losses faced by vessels on top of the “desperately poor” Brexit fisheries deal.

I am writing to you as the second week of 2021 draws to a close, and our industry is facing mounting financial losses. Many fishing vessels are tied to the quay wall. Of the others that can go to sea, some are now making a 72 hour round trip to land fish in Denmark, as the only way to guarantee that their catch will make a fair price and actually find its way to market while still fresh enough to meet customer demands.

This, on top of the desperately poor deal on fisheries in the Trade and Cooperation Agreement, is not what you promised the fishing industry. In your letter to me of 6th July, you said: “We are simply not prepared to agree to an arrangement that is manifestly unbalanced and against the interests of the UK fishing industry.” Yet that is what has been agreed. You also said that “We are committed to ensuring there are annual negotiations for access to, and sharing of, fishing opportunities, based on the principle of zonal attachment.” Yet we find ourselves with an outcome where the EU fleet will continue to have full and unfettered access to UK waters until the middle of 2026, and should the UK want to change these arrangements at that point, the EU can impose a suite of punitive sanctions on the UK. No other coastal state in the world is in this position.

You and your Government have spun a line about a 25% uplift in quota for the UK, but you know this is not true, and your deal does not deliver that. The adjustment in shares falls very far short of your stated policy of basing these on zonal attachment. While there are some modest increases for some commercially important stocks, these fall very far short of zonal attachment. North Sea herring is a good example – under zonal attachment, the UK’s share would be around 90%. Your deal moves the UK share from 24.5% to 32.2% over five years – this can hardly be claimed as a resounding success. Of major concern however, is the outcome for many key whitefish species. Your deal actually leaves the Scottish industry in a worse position on more than half of the key stocks and now facing acute problems with North Sea cod and saithe in particular.

This industry now finds itself in the worst of both worlds. Your deal leaves us with shares that not only fall very far short of zonal attachment, but in many cases fail to ‘bridge the gap’ compared to historic catches, and with no ability to leverage more fish from the EU, as they have full access to our waters. This, coupled with the chaos experienced since 1st January in getting fish to market means that many in our industry now fear for their future, rather than look forward to it with optimism and ambition.

Your deal does provide a glimmer of hope for better times ahead, beyond 2026, if whoever is in power then makes the right decision – the decision that you should have made – for the UK to genuinely be an independent coastal state, and not one in name only. It was encouraging to hear George Eustice tell Parliament yesterday that the government will do this, though of course neither he nor you can guarantee who will be in power and able to make this decision in 2026. But this must be the goal to focus on. Your deal has failed the industry in the short term, but there is scope to rights its wrongs, and your government needs to commit to doing everything that it can to achieve this.

The current situation however is such that many in the seafood supply chain fear they will not survive to see that opportunity materialise. You committed to the Liaison Committee this week that fishing businesses affected by the delays in getting fish to market since 1 January will be compensated for their losses, so we expect to see the details of this compensation scheme as a matter of urgency, and of course this must be new money, and not taken from the £100 million that you have already announced for investment and innovation.

There is huge disappointment and a great deal of anger about your failure to deliver on promises made repeatedly to this industry. We will have another chance to revisit this in 2026, so there is much to do between now and then to prepare the ground for that. But for now, the priorities must be your government securing enough fish though the talks currently taking place with the EU and Norway for 2021 to, as a minimum, bridge the gap that your deal failed to, and acting immediately to stem the losses that are mounting up and compensate those businesses already affected.