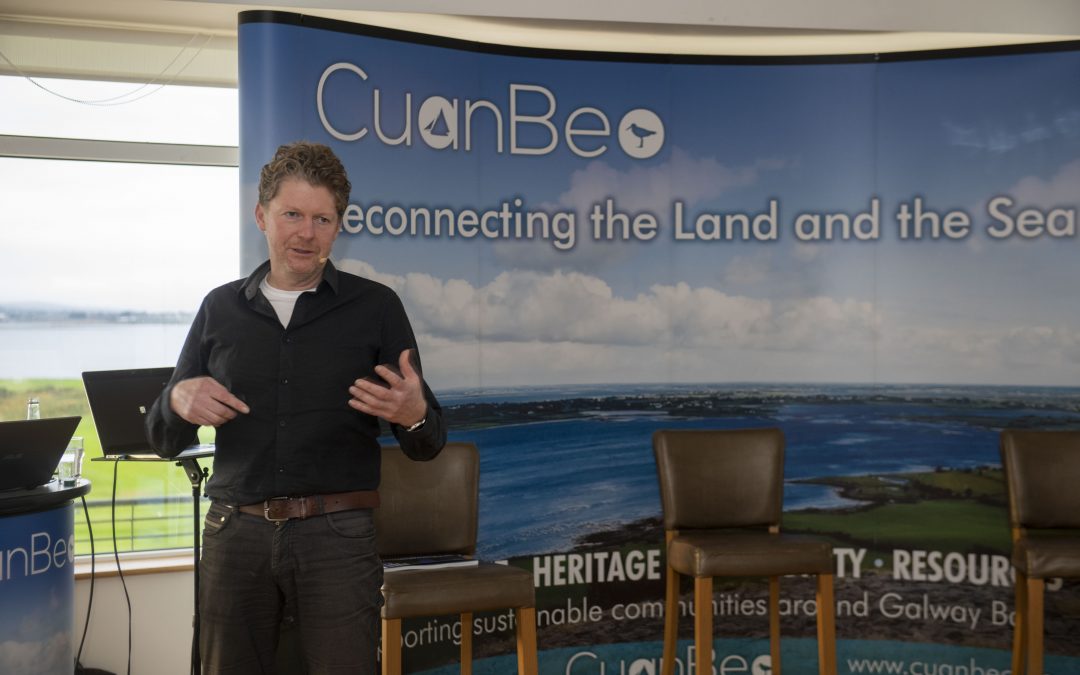 Cuan Beo, a community based coastal organisation working in South East Galway Bay, have published a major 1-year report ‘An Economic Assessment of the Marine Resources of the South-East Galway Bay Catchment’.

This report, the first of its kind, notes the value of marine related industries in the region which generated revenues of €105m and supported approximately550 jobs. The ground-breaking report also delved further, in setting out to identify and value the ecosystem services of South East Galway Bay. It placed a monetary value on the coastal environment and what it contributes to the human health and well-being of the region.

The report was commissioned to highlight the importance of the marine resource of South East Galway Bay and to help better inform national policy making and local decision making.

The report was presented at a regional event held on Friday afternoon last (19/11/21) attended by local politicians and policy makers, representatives of State agencies together with those working and living in this coastal catchment. It included farmers and fishermen, community groups, tourism and recreation groups, scientists, environmental groups and those who rely on the sea and the coastal area of South East Galway Bay for a living.

A panel, including Ms. Elaine Donohue (Bia Innovator), Prof. Stephen Hynes (SEMRU),  Ms. Ciara O’Halloran (Flaggy Shore Oysters), Mr. Alan Farrell (Galway County Council) and Mr. Ruairí Ó Conchúir (LAWPRO) provided an opportunity for those attending to open the conversation around the future development of the region in a sustainable way. The event was moderated by Dr. Micheál Ó Cinnéide (former EPA Director and now Corrib Beo). The report is the first of its kind in Ireland to begin the process to quantify both established (market) industries and ecosystem (non-market) services and their value on a catchment wide basis. 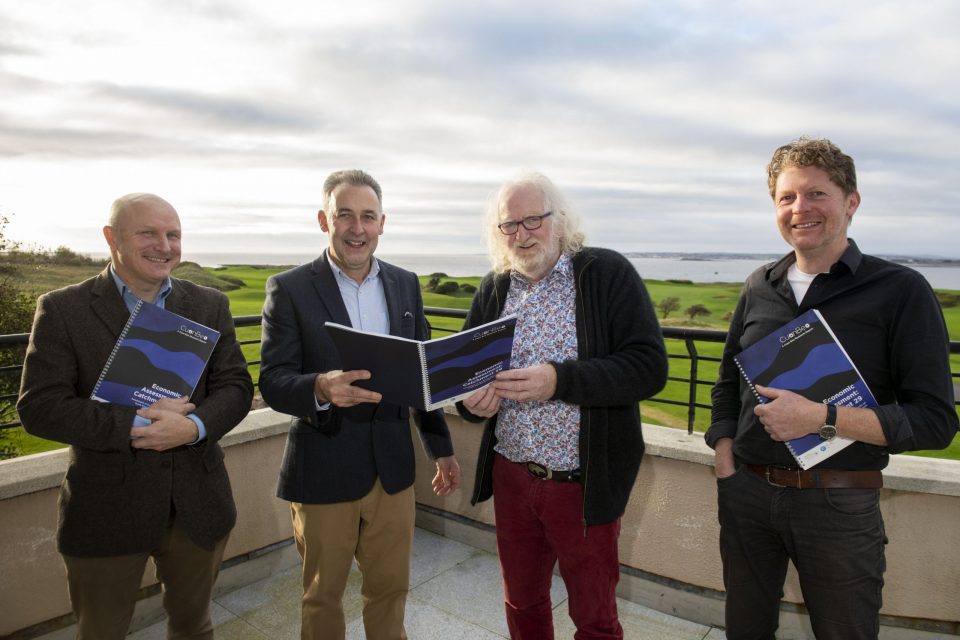 The South East Galway Bay Catchment is a very distinct geographical area. It is connected by a common drainage system, drawing all rainfall and run-off water in the catchment and discharging it into Galway Bay. There are 46 catchments in Ireland according to the Environmental Protection Agency (EPA). The South East Galway Bay is known as Catchment 29 and covers an area of approximately 1,200 Km2. It includes about 117 km of coastline stretching from the Galway Harbour to Blackhead in Co. Clare and extends inland to Athenry, Loughrea and Gort. The report highlights the value and importance of data collection and management for the catchment.

The report also highlights potential growth areas across a number of key sectors where the resources available in the catchment could be developed in a sustainable manner to create new jobs and generate revenue. These growth areas include climate technology, blue health, marine and coastal tourism, research and local community development. These sectors offer unparalleled opportunities for growth and sustainable development, building on the circular economy and supporting climate resilient communities.

According to Mr. Diarmuid Kelly, Chairperson of Cuan Beo, ‘now that we have established market and non-market economic baselines, this report will heighten awareness with policy makers and planners as to the true value of the resource base and the marine environment. It will promote this catchment as a location for research and development in sustainability and environmental enhancement. This will become increasingly important as social and environmental measures, such as carbon emissions and sustainability development goals, are established and monitored.’

The report was conducted by Dr. Colm O’Dowd. He noted, ‘valuing both market and non-market products and services from the marine environment is necessary if they are to be included in marine spatial planning and management decisions. For example, while we know that shipping and tourism are vital economic pillars in this Catchment, there is little awareness of the value of marine related recreation or the potential healthcare savings associated with activities such as sea swimming. Assessing the economic value of these activities and of marine ecosystems should influence decision making on marine spatial planning and support improvements in water quality and access to coastal areas.’ 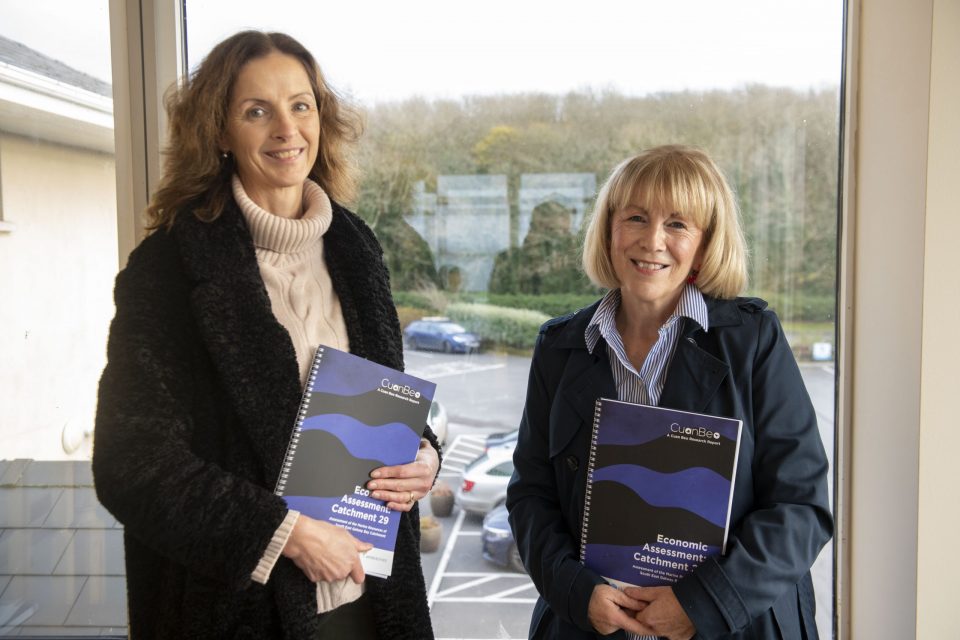 Trish Daly BIM and Cllr Martina Kinane at the launch of Cuan Beo’s report on the Economic Assessment of the Marine Resources of South East Galway Bay Catchment at the Golf Club at the Galway Bay Golf Resort Renville, Oranmore. Photo:Andrew Downes, Xposure.

The report was funded by Cuan Beo, the Local Authority Waters Programme (LAWPRO) and the EU EMFF under the FLAG West Programme. The report launch event also highlighted the activities of Cuan Beo including its Oyster Restoration project, the EU FORCOAST research project, and the Cuan Beo Environmental Education Project funded under the LEADER programme.