Body recovered from water in search off Teelin 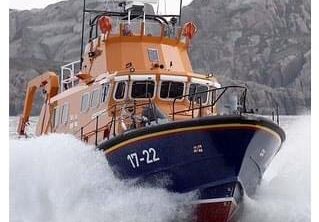 Arranmore RNLI was launched at the request of Malin Head Coast Guard to reports of an EPIRB (Emergency position-indicating radio beacon) activation at Teelin on the north-west coast of Donegal, last night, Wednesday 26th.

The Lifeboat was launched at 8 50pm, to reports of a boat on the rocks. On arrival at the scene the Coast Guard helicopter R118, Killybegs Coast Guard boat and local boats were searching the area. The unmanned boat was discovered on the rocks and the lifeboat crew assisted in the search for the fisherman who had earlier gone out in his boat.

At 11.16 pm a local boat discovered a person in the water who was brought ashore by the Killybegs Coast Guard boat. The man was transferred to Letterkenny University Hospital and was later pronounced deceased.