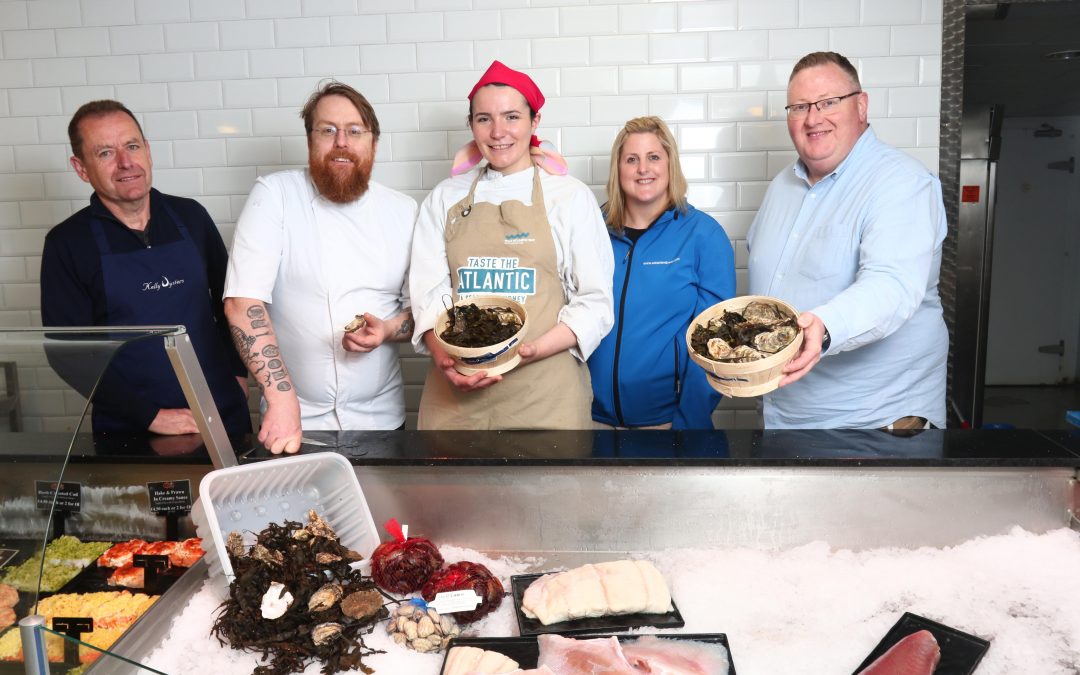 Bord Iascaigh Mhara (BIM), Ireland’s Seafood Development Agency, in collaboration with Chef Network Ireland and Fáilte Ireland today announced the Taste the Atlantic, Young Chef Ambassador Programme for 2022.  The aim of the programme is to engage with five ambitious young chefs, and over a four-month period mentor them through an exciting journey of learning about Ireland’s premium seafood offering along the Atlantic seaboard.  This is the second year of the successful programme. Five chefs took part in the programme in 2021.

The selected chefs will benefit from on-site farm visits with Taste the Atlantic seafood producers where they will learn first-hand how organic salmon, mussels and oysters are sustainably produced in Ireland. They will also receive training in social media, business, culinary and fish handling skills from experienced industry mentors, such as Michelin starred chef, JP McMahon. Each chef will be paired with a Taste the Atlantic producer to learn about the provenance of the seafood they produce, broadening their knowledge and inspiring them to create Irish seafood recipes.  At the end of the programme, the chefs will work together to create a Taste the Atlantic menu, showcasing the skill and knowledge they have gained on their journey as ambassadors helping to highlight the quality and sustainably produced seafood on the Wild Atlantic Way as well as raising awareness of food tourism.

Máirtin Walsh, Development Executive with BIM said, “BIM is delighted to announce the second year of the programme and looks forward to building on the success of 2021.  It was inspiring to work with last year’s chefs and to watch them develop such an appreciation of Ireland’s valuable aquaculture sector.  As a sector, providing direct employment to almost 2,000 people, it’s a significant contributor to rural, coastal communities, and was valued at €175 million in 2021. The consumption of seafood in Ireland grew by 3% to €418 million in 2021, with the hospitality sector being the main contributor. We look forward to guiding this year’s chefs on their Taste the Atlantic seafood journey!”

Sarah Browne from County Kerry was one of the Young Chef Ambassadors in 2021 and went on to work at Cava Bodega in Galway after the programme. Speaking at the launch of this year’s programme, she said:

“I’m passionate about sustainable food and I was so impressed when meeting the producers last year how much emphasis they place on sustainability and how future-focussed they were.  The programme really boosted my confidence in my culinary skills around seafood and it was a huge stepping-stone for my career.  I’d highly recommend it.”

JP McMahon, chef-proprietor at Michelin-starred Aniar restaurant, will provide mentorship to the chefs again this year and he spoke about why he is so supportive of the programme. “This program offers a fantastic opportunity for young chefs to develop their appreciation and understanding of the wealth of Irish seafood available to them.  They will get to know producers, understand how the seafood is produced and develop their culinary creativity and confidence, learning how to prepare beautiful seafood dishes. Locally sourced produce is key to any good menu, and it doesn’t get much better than the seafood offering along the Wild Atlantic Way!”

Chef Network is a professional network connecting chefs across the island of Ireland, with over 4,500 members. Programme Manager, Ruth Hegarty said, “The Taste the Atlantic Young Chef Ambassador programme is a really exciting collaboration which brings together Ireland’s up and coming culinary talent with our wonderful seafood producers to explore the food tourism potential along the Wild Atlantic Way. It is so important to keep young chefs motivated and curious through opportunities to gain experience, upskill, and explore their creativity, and in my experience, meeting food producers is hugely inspiring and motivating for chefs, which is why I am genuinely delighted that Chef Network have the opportunity to run this programme alongside BIM and Fáilte Ireland.”

The Ambassador programme is now open for nominations, with full details available on www.chefnetwork.ie.  The closing date for nominations is May 24th.  Interviews will take place in June, following which we will announce the five successful 2022 young chef ambassadors, who will embark on their Taste the Atlantic seafood journey from June-September

The Young Chef Ambassador Programme is co-funded by the Government of Ireland and the European Union, under the European Maritime Fisheries and Aquaculture Fund (EMFAF).