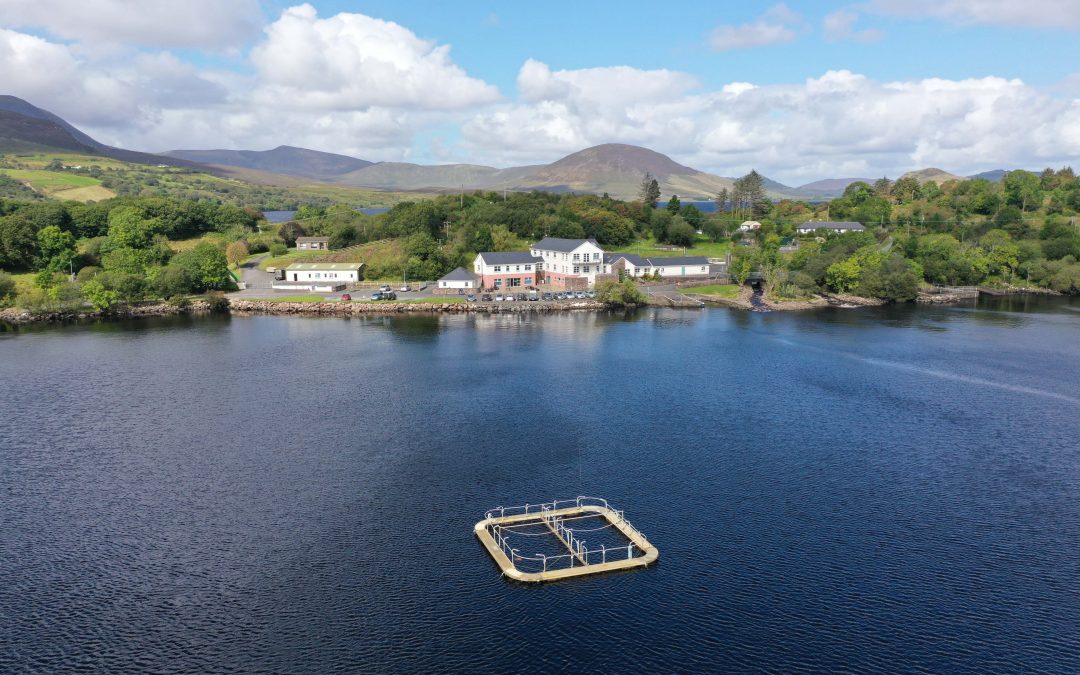 Ireland’s aquaculture sector supports coastal communities, providing employment opportunities for many in our coastal regions. Aquaculture research is an important element of the work carried out at the Marine Institute’s Newport Research Facility, with multi-disciplinary research undertaken on both the freshwater and marine phases of Atlantic salmon production.

The salmon lifecycle begins in freshwater, as thousands of eggs are laid in the gravel beds of fast-flowing clean rivers by adult salmon. After one to three years they reach the smolt stage, where they move downstream, where they begin their journey in the ocean.

Atlantic salmon farming mimics this cycle, where the early phase of production begins on land in freshwater facilities for up to one year before the salmon smolts are transferred to sea for rearing in pens for up to eighteen months.

Recirculating Aquaculture Systems (RAS) are a proven technology increasingly employed in the freshwater phase of Atlantic salmon production. The system enables the fish farmer to completely control parameters such as water temperature, oxygen levels, and light, providing more stable and optimal conditions for the fish.

In recent years, a number of countries have utilised RAS for the freshwater phase of production and produced smolts of a larger size in order to reduce the length of time fish have to spend at sea.

A new state-of-the-art freshwater RAS at the Marine Institute’s Newport Research Facility, Co Mayo is being utilised as part of a major research project that addresses the needs of Ireland’s aquaculture sector. The four-year research project, SALMSON smolt, is investigating the potential of RAS technology to produce larger Atlantic salmon pre-smolts.

Funded under the European Maritime and Fisheries Fund Knowledge Gateway Programme and is administered by Bord Iascaigh Mhara (BIM), the aim is to produce smolts that are more robust and also reduce the grow-out time at sea to one year.

The Marine Institute RAS in Newport, consists of eight 5.5 metre cubed tanks with a capacity of 44,000 litres and it is capable of producing up to 12,000 Atlantic salmon pre-smolts at a time.

By linking up with the Lehanagh Pool Marine Research Site at Beirtreach Buí Bay, Co Galway, the SALMSON project will follow the performance of the smolts after they are transferred to sea and will be compared with smolts grown in conventional flow-through tanks.

Neil Ruane, Aquaculture Manager at the Marine Institute said, “In many ways, Atlantic salmon farming has incorporated a range of technological advances, however, the production model in Ireland is still based on traditional methods.

“The adoption of new technologies and innovations will be vital for Ireland to remain competitive, and reinforce our position as a producer of quality organic farmed Atlantic salmon”.

The Marine Institute’s Newport Research Facility and the Lehanagh Pool Marine Research Site will provide an opportunity for collaboration on a variety of potential research projects and form an integral component of a marine research cluster involving third-level institutes, BIM, Údarás na Gaeltachta and the aquaculture industry.

The Newport Research Facility has a long and distinguished record of conducting important scientific work that helps our coastal communities. In recent years, advanced technology has been used there to satellite track Bluefin tuna in order to understand their migrations off our coast.

A new project on Pollock also, is examining the size and extent of the stocks off our west coast to see if quotas could be increased to benefit our coastal communities.